A Twitter user from South Africa has taken to the platform to explain how he got to know that he was not the biological father of a child, after being his father for seven years.

According to him, his lover told him the shocking truth through a sticky note she wrote before she left their apartment.

It read, “Lelo, I’m sorry for breaking your heart. Sorry. DNA test failed. The baby is not yours.”

The heartbroken man then proceeded to make a consolatory post for himself.

He wrote, “For his anger lasts only a moment, but his favor lasts a lifetime; weeping may stay for the night, but rejoicing comes in the morning.For 7 Years! I mean the Whole 7 Wow.”

Since he publicized the situation he found himself, other users on the platform have been trying to pacify him, urging him to move on. 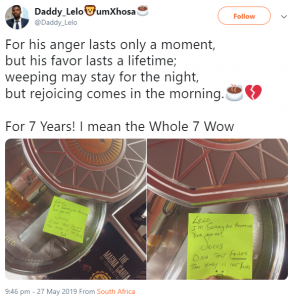 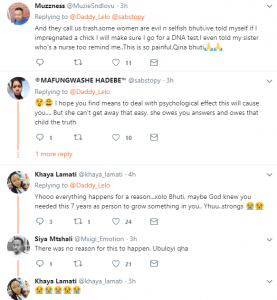 Costa out, Cavani in – Athletico to sign star striker