One Nigerian Man identified as Dennise has taken to his twitter account to narrate his encounter with some SARS operatives.

The young man who just came back from Netherlands stated that he was on his way to the eastern part of the country when he was stopped by SARS operatives along Benin road.

The SARS operatives extorted N600,000 from him before he was set free. 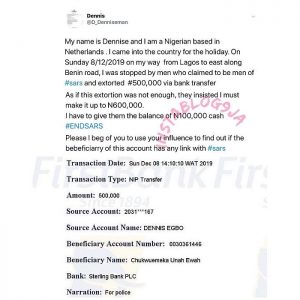