Lamonte McIntyre, a 41-year-old man who was wrongly imprisoned and convicted in 1994, for a double murder he never committed has been exonerated  after a week-long hearing.

McIntyre’s was arrested at age 17, and spent the past 23 years behind bars as part of two life sentences on two counts of murder.

The young man was emotional at the reunion with his family and had wept at the defense table after the Wyandotte County Dustrict Attorney Mark Dupree Sr. shocked the courtroom, when he said the county would no longer contest the facts of McIntyre’s innocence.

When McIntyre stepped from the north side of the Wyandotte County Courthouse and detention center on Friday afternoon, just before 4 p.m., his mother ran and then walked toward her son as he was swarmed by the media. “I’m all right. I’m happy, you know,” McIntyre said to reporters. “I’m here thanking God.

The woman who was very much overwhelmed with the unfolding event of her son’s release was very excited and said, “I’m thanking everybody who supported me and been here for me. It feels good. I feel good. I’m happy.”

Embracing his mother, Rosie McIntyre and also hugging his family members, he said, “I’m glad that everyone showed up out here to experience it with me. I appreciate it a great deal.” Asked what he might want to do in his first few moments of freedom, McIntyre joked: “I thought I wanted to eat something, but my nerves are so shot I can’t even eat right now. “I think I’m just going to take a bath and just chill for a minute, let it all soak in, I think. But whatever I’m going to do, I’m going to enjoy it. I’m excited. On the inside, I’m bubbling over. I feel emotional. It’s been a long time coming.” 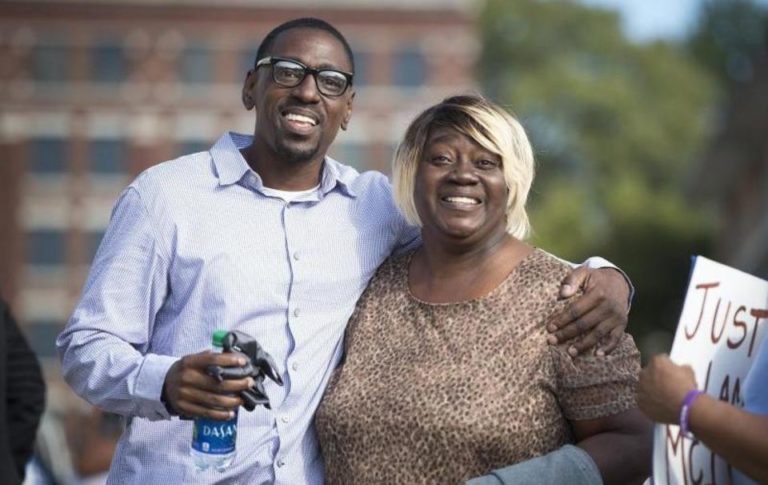 PHOTOS: Look Inside the Most Expensive House on Earth – Villa Les Cèdres

Nigerian, Victor Agunbiade, celebrates promotion as Lieutenant-Commander in US Navy