Students of the Osun State College of Education have been asked to leave the school premises after they protested the deaths of four students on their campus.

While explaining the incidents that led to the protests, a 400-level student, Ridwan Aare, told newsmen from Punch that, although all those who died had fallen ill in their various residences, the protesters were just agitated at the rate at which their colleagues have passing on.

Speaking further, Aare, who is the spokesperson of the National Association of Nigerian Students in the school, explained that the shut down was saddening as the protests were largely peaceful.

“Just yesterday (Monday) after our congress, we got information that two students died. One Ayomide, a 300-level Agriculture student, as well as one other student, whose identity is not immediately known, also gave up the ghost.

“Today, we decided to embark on a peaceful protest because of the serial deaths. We don’t know who the next victim will be. Many of our requests to the management are also left unattended to.” 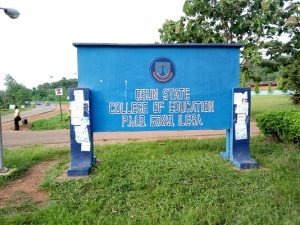 In its reaction, the school management through a statement released by the Public Relations Officer explained that the deaths have not been consistent as claimed by the students, and the decision to lock down the school had to be made because the protests were already turning into riots.

The statement read, “It is unfortunate that while the college’s management, staff and the legitimate representatives of student bodies were mourning these sad occurrences, some miscreants chose to use the occasion to mobilise unsuspecting students for violence to the extent of assaulting the Divisional Police Officer and his men.”

Another building collapses in Lagos Island, kills one

Inauguration: “This should have been Atiku and PDP’s day” – Fani-Kayode trolls Buhari