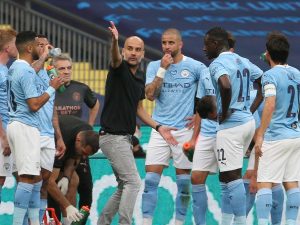 Manchester City defeated Newcastle 2-0, on Saturday, to close the gap on Premier League log leaders, Liverpool, to within five points.

City midfielder, Ilkay Gundogan, and forward, Ferran Torres, were on the scoresheet amid the rain and strong wind that swept through the Etihad Stadium on Saturday evening.

The win marks a six-game unbeaten run that moves the Manchester club up to fifth in the EPL standings.

City’s season has, so far, been characterized by low score lines, unlike in past campaigns where Pep’s side scored for fun.

News of Kyle Walker and Gabriel Jesus testing positive for coronavirus, as well as two members of the club’s staff, must have raised Newcastle’s hope of a possible away victory.

However, any such hopes were quickly extinguished when Raheem Sterling played in German midfielder, Gundogan, for an easy close range strike.

Memories of the frustrating 1-1 draw with West Brom, last time out, must have hunted City after Gundogan opening goal.

Unlike the previous match day, Federico Fernandez turned Joao Cancelo’s low cross, in the second half, into the waiting arms of Torres, who did justice to the move by finishing with class.

Midfielder, Kevin De Bruyne’s, recent loss of confidence in front of goal continued as the Belgian is yet to open his account from open play this season.

City’s two goals makes it only the third time in 12 league matches they have scored more than 1 goal i a match.

Man City Winger, Raheem Sterling, should have improved on that record, but failed to lash on to Cancelo’s teasing pull-out.

Bernardo Silva is another who should have increased City’s goal tally, but the Portuguese could only hit the outside of the post with his strike.

Sergio Aguero’s recuperation from injury continued as he was brought on in the second half to gain much needed match fitness.

The Argentine should have scored City’s third, but his shot was too close to Newcastle Goalkeeper, Darlow.

‘I Thought #EndSARS Protest Was Against A Virus’ – Anthony Joshua

Khafi and Gedoni, From Big Brother Naija, Hold Their Wedding