Marvel Announces the Prelude for ‘Spider-Man: Far From Home

After the unveiling of Marvel Comics 2019 issue solicitation, Marvel announced that “Spider-Man: Far From Home” movie will also be part of the company’s series of releases in 2019. Therefore, Marvel released a comics in form of a prelude to the film. 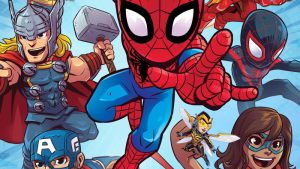 Some authorities in the Organization are trying to be cautious about ways to market the anticipated Spidey Flick. As a matter of fact, fans have not seen the trailer yet. However, a clip was seen some weeks back during the Brazil Comic-Con Experience. Kevin Feige, Head of Marvel Studio has said that “Far From Home” will refine the so-called spiderman character in a different way.

Will speaking with Comic Book.com the Marvel Studio head explained, “We like (the title) of course because it ties into Homecoming, not just keeping that word going, which we like and we liked it more than Homecoming 2, but that notion of ‘home’ is a word that has dual meanings we’d like to continue with this (Marvel Cinematic Universe) version of Spider-Man. So, Far From Home has multiple meanings.”

Kylie Jenner Becomes the 5th Richest Celeb According to Forbes

We are happy with what we’ve seen: Lawmakers to Amaechi on the railway project