Many Italians staged a protest at the front an appeal court in Ancona on Monday, over the acquittal of two men who allegedly raped a lady in 2016.

It was gathered that the judge, who presided over the case at that particular court, stated that the supposed victim was “too masculine”, besides, the accused were not in any way attracted to her.

The protesters assembled just outside the court and began to say “for shame!” They equally lamented that the judicial system in the country is misogynistic and full of witch hunting.

The verdict had been passed since 2017, however, the main reason for freeing the two men just got out last Friday after the highest court of appeal in Italy reopened the case.

It was revealed that they were initially convicted in 2016 for raping the lady in 2015 but the Ancona court of appeal revoked the sentence and set them free. 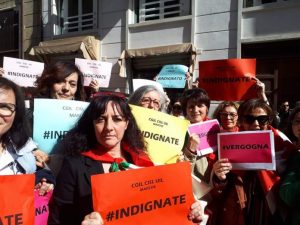 The complainant had explained that one of the men forcefully had sex with her while the other one stayed as his guard. She also mentioned that they spiked her drink.

To corroborate her statement, her doctor stated that she sustained injuries which were common with rape cases.

However, the appeal court judge mentioned that the lady’s side of the event proved too difficult to believe, precisely because the men were not attracted to her, and she looked too masculine.

Reports also have it that the judge mentioned that it was very possible that the lady planned the whole event, reiterating that, the man “didn’t even like the girl, to the point of having stored her number in his phone under the nickname ‘Viking’, an allusion to an anything but feminine figure, rather a masculine one, and the photograph present in her file would appear to confirm this”.

After a couple of mixed reports about the case, a new court proceeding has now been put in place. Although the date has not been announced.

Lawyer sentenced to 33 years imprisonment, for speaking against headscarves in Iran