Abena Korkor, In a live session on Instagram, dropped a long list of celebrities she has had sexual encounters with and according to her. 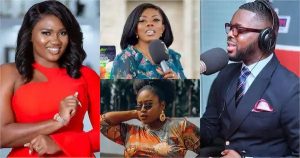 In the video she mentioned the name of Kojo Yankson, KOD, Sammi Awuku, and many more.

Abena revealed that though she wanted more from Kojo, he however thought she’s just a “big bum” he is having fun with.

Korkor said, “I mentioned Kojo’s Yankson’s name some years ago that we had sex. Yes, we did. It was fun, I think I wanted more but to him, I was just a big bum that he is having fun with.

“I think he was actually dating Nana Aba Anamoah and sleeping with Lydia Forson at the same time. I just hope the two women knew and they were ok with that”