Meet The Nigerian Artistes Interested In Becoming Governors Of Their States

Following the Not Too Young to contest bill passed by the Nigerian Senate some days ago, Nigerian artistes has revealed their political ambition to become the Governor of their individual states.

Recall that the interest was first made by Five Start Music general, Kcee, who revealed his interest in becoming the governor of Anambra State.

The singer took to his social media page to share a copy of his campaign poster along with the caption: “Its about time, Big Announcement on Tuesday, August 8, 2017 at 11am…. #Nottooyoungtorun #Attentiontodetail2017”

However, other artistes have made their political interest in their states known as another musician, Vic O took to his social media page to reveal his interest in the governorship race in Cross River state. 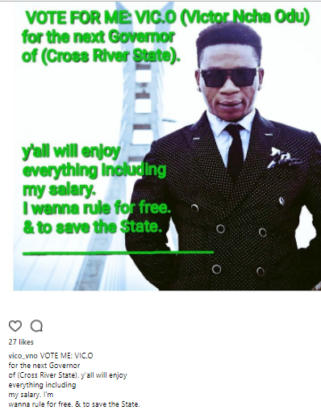 He wrote along with his campaign poster: “MY PEOPLE,THE TIME IS NOW. POWER BELONGS TO THE YOUTHS,SAY NO TO OLD CARGOS…VOTE TERRY G FOR GOVERNOR/DEPUTY OF BENUE STATE ,I WILL MAKE YOU PROUD..WHEN I SAY LEGALIZE YOU SAY GINJAH..” 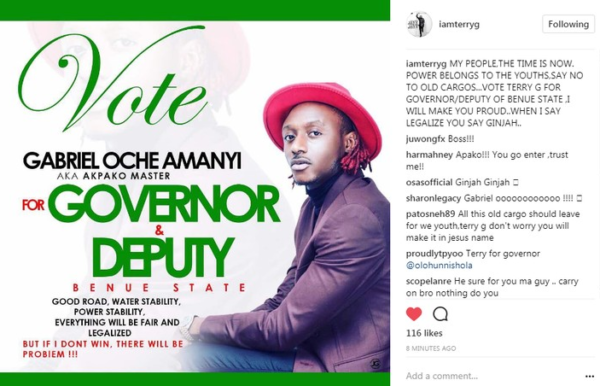 Sugardaddy who made business cards to recruit Sugarbabies banned from beach