Numerous followers and pictures of them staring pensively into the distance? Double check.

These gentlemen are not your run-of-the-mill young men. Thanks to their good fashion sense, attractive bodies and visage, these young millennials have attained a demi-god like status among netizens on Instagram.

These men, despite not being models, are regarded as the crème de la crème of the social media world and are anything but camera shy.

Their pages are filled with flattering and professionally shot photographs of them eating at pricey restaurants, “vacay-ing” at some tourist destination, paragliding or hiking during the weekend or surprisingly doing something mundane that leaves their followers- male and female alike- drooling in the comments section. A perfect example is 28 year old Anthony Barillo, with his 57000+ followers and catchy and succinct Instagram captions, The elite property salesman “self-effacingly” describes his Instagram as “a visual diary of a top-producing, Ivy league-educated broker in New York city…” but the well put together pictures of him showing off his Greek-godlike body gives him a pride of place as a “quintessence of male thotism.”

One hardly thinks of property or salesman when one sees this picture of Barillo, muscles-a-bulging in snug fitting casual wear as he promenades the streets of New York.

Nor does one think of musty bookshelves and that beautiful smell of print when one sees this picture of Barillo in a navy bespoke suit and horn-rimmed glasses as he thumbs through a book- that he is clearly not reading. While the rest of us go to libraries and come out with, well, just books, Mr Barillo, as his caption implies, came out with not just four books but also, an Instagram photo. 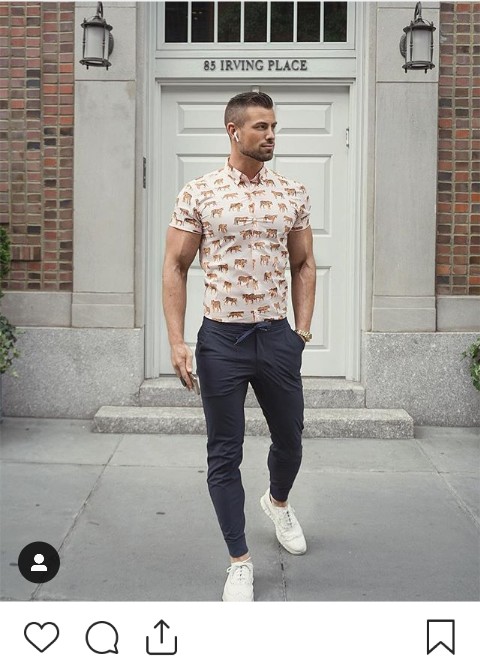 The throngs of adulatory comments strewn all over his comment section is proof of the benefits mr. Barillo reaps from having artfully captured photographs that highlight his good build, razor-sharp jawline and perfect coiffure. 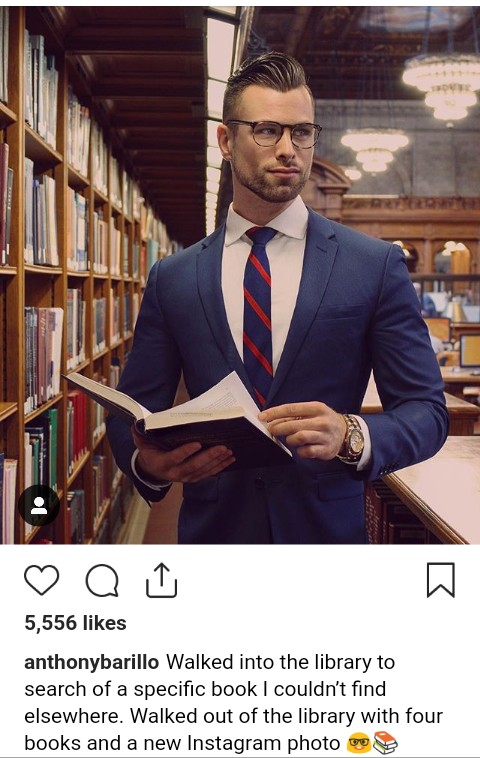 But Barillo is not alone in this trend as guys like Gustavo Nassopolini, Omar Borkan al Gala, Tim Chung, Mike Zoppo and Xavi Cerra all have similar photos like this taken at different spots in the cities they live in and exotic vacation destinations.

While these men may look like something straight out of a fashion magazine with their professionally shot photos, flattering outfits and athletic build, they often work in finance, law and real estate and talk about “going in at 100%” when doing deals.

Think of the successful and accomplished male protagonist in a traditional Mills and Boons novel, with the devastating good looks and you have these guys. 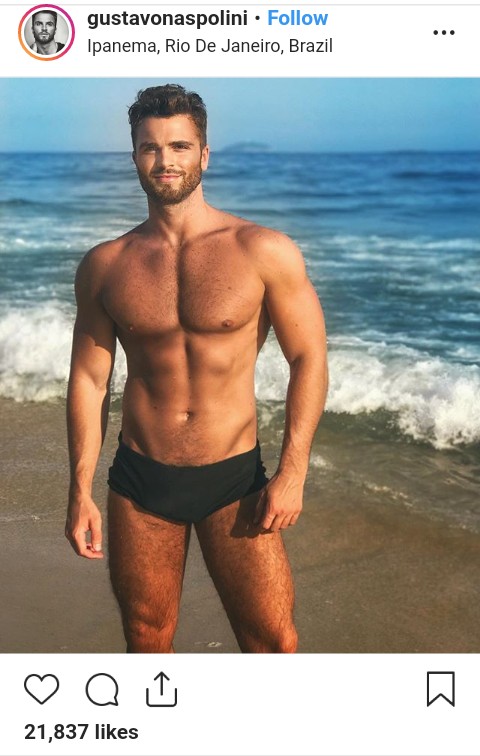 Also worthy of note is Omar Borkan al Gala, poet, actor and photographer, who first came into the limelight in 2013 when he was reportedly kicked out of Saudi Arabia after the kingdom’s religious police deemed his photographs ‘too sexually attractive.” They were afraid that women wouldn’t be able to control themselves around him- and looking at his smoldering eyes and gorgeous Arabic features, we can say their fears were not unfounded. 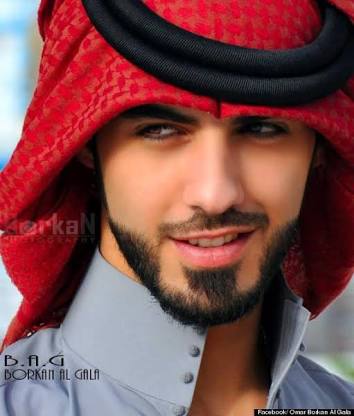 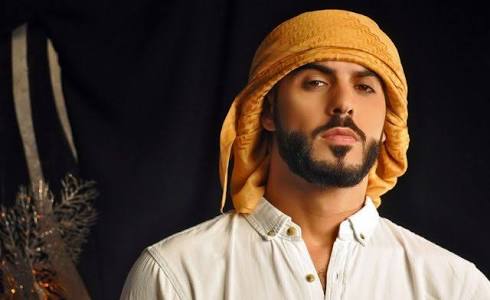 Last, but by no means the least is Tim Chung, Kylie Jenner’s bodyguard. Gone are the days when bodyguards were unattractive looking six-foot plus humans. These days, they wear bespoke and pose just as well for the camera as the celebrities they protect. One rarely thinks of body guard and security situations when one sees this “in motion” picture of Chung with his poker face expression and leather jacket and tote bag in tow as the setting sun lovingly reflects off his profile. 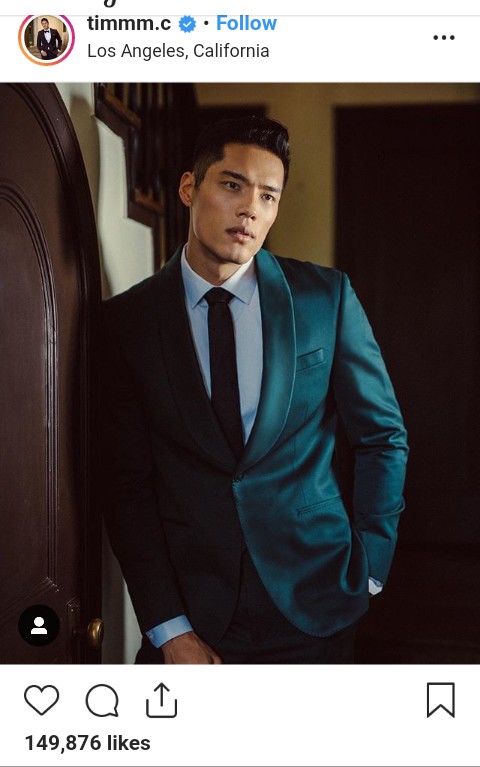 According to the Urban Dictionary, the term “Thot” which has been in use on online spaces since 2014 is actually an acronym that stands for “That Hoe Over There” or “Thirsty Hoe Over There”. Initially, it was a derogatory term that was used to refer to a woman of questionable morals or a woman that was openly promiscuous. However, in recent times, the term, just like the word “bitch”, it has been revolutionized to bespeak a certain confidence in and out of the bedroom thanks to female internet users and popular female musicians like Nicki Minaj and Cardi B. But irrespective of that, the term has always been primarily reserved for women- until recently. 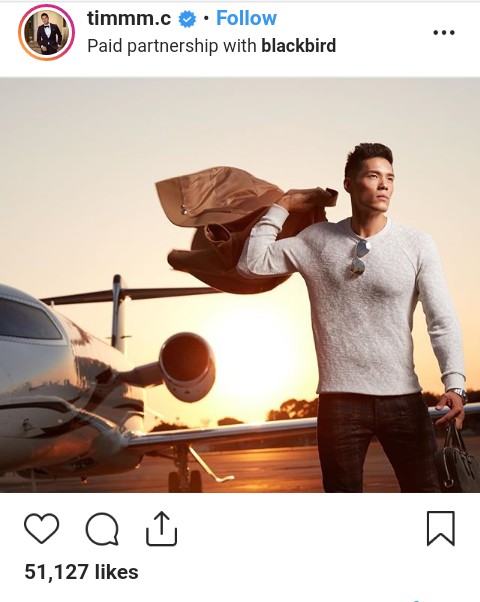 While a female thot is traditionally a girl who is overly confident of her sexuality, is not afraid to throw it in your face and is not shy about letting the world visually ride the curves and bends of her body, a male thot, like writer Priya Alika Elias described is:

A uniquely contemporary young businessman who puts in an extraordinary amount of time into their social media feeds while trying to appear not to- all as a way of showing off how hot they are.

In essence being a male thot is a delicate art of sorts that by no means includes loud and in-your-face sexuality but rather, a fit body, a wardrobe of formfitting designer pieces, an impeccable coif, a bevy of poses in a variety of sexy or expensive locales and finally, the cherry on the cake, that aura of effortless and unconscious sexiness; a certain je ne sais quoi if you will.

While there is a growing number of men that fit the male thot description, most of them obviously don’t like the title and are always quick to say their decision to upload pictures of themselves was just simply to show off their look for the day or more commonly, “to strengthen their self-confidence.” Peter Derock, a 28 year-old blogger and fashion designer cum brand promoter, who lives in Berlin and works as a marketing manager by day, is known for running an Instagram account dedicated to mouthwatering and envy-worthy pictures of these dashing young men that he gets from all across Instagram. According to him, he saw a demand for high-end fashion pages for men on Instagram in 2015. Like any good entrepreneur, Derock rose to the occasion and filled this service gap by creating the account. In his words:

Women had a lot of pages they could consult if they wanted fashion tips, inspiration, workout pictures or just to post pictures of themselves. Men on the other hand had a little back then…

His initial plan had been to create a fashion page by simply reposting images he found on GQ and Esquire but as his followers increased, he had a rethink as there was a bigger demand for “authentic males” who did not have ties to any modeling circles. Even though it is obviously the topless pictures that get the most likes from men and women- and also the largest number of thirsty comments-, Derock doesn’t think the word “thot” is appropriate in this context as he believes thotting has to do with trying to convince people to sleep with you. In the area of the increasing number of male thots, Derock is of the opinion that this phenomenon has to do with a radical cultural change where men no longer ascribe to the belief that real men look rough and have no time for fashion but rather actually want to be better, look and dress better. And who better to drive this male fashion revolution- and serve as sources of inspiration- than these men.

Unfortunately, while the male thots are considered models of some sorts, their female counterparts are not and despite the fact that both parties make money from their carefully curated photo galleries, it is less shameful and somehow “professional” when you do it as a man. While the men have liberty to post thirst traps and topless, suggestive pictures, when their female counterparts do so, they are slut-shamed. Instagram also contributes to this by taking down any post that even outlines a woman’s nipples, effectively showing that the platform’s definition of nudity varies with gender. On the gender imbalance of this situation, Elias opines that male thots won’t be policed around anytime soon simply because they are men and as such are generally reputed be less aware of their looks and its effects on others unlike women  who have always been conscientious of their appearances and having been putting them to judicious use ab aeterno.