On Wednesday, Us first lady, Melania Trump condemned those she referred to as “opportunists”. She lamented that writers and journalists have been making themselves popular by cooking up stories about her family.

Melania had a sit-down interview with Sean Hannity in the George HW Bush aircraft.

In the interview, she lamented, “the hardest part of being in the White House are the opportunists who are using my name or my family name to advance themselves from comedians to journalists, to performers, book writers. It doesn’t hurt, but they are writing history. And it’s not correct.”

Melania emphasized that news writers usually pay more attention to “nonsense” and “gossip”. She said it would have been fair if they had focused more on the things her husband’s administration has been doing. 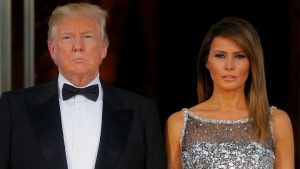 She said, “I know I will get the criticism — from the public or from the media — but I will do what is right and what I feel is right for the country and for the people. That’s why I say I want to stay true to myself and listen to myself and what to do and what is right, what is wrong and live a meaningful life every day.”

She then stressed that it also means she has to let her husband know the things she doesn’t agree with.

She confessed, “I don’t agree with his tone sometimes, and tell him that. I said to him, I don’t think you need to be that out,” Trump said. “On the end, it’s his decision. He knows the consequences. He’s an adult. But he’s a fighter. He’s the fighter.”

Afterward, she said, “He’s fighting for America and the American people every day”.

The interview was the second one she has done since Donald Trump became the United States president.

Magu : I have only one house