A bizarre wooden sculpture of US First Lady Melania Trump has reportedly to been  burnt down near her hometown in Slovenia, prompting its removal.

Brad Downey, the American artist who commissioned the statue, said it was targeted on 4 July, Independence Day in the US.

The Berlin-based artist arranged for the charred statue to be removed the next day.

Police announced that they had launched an investigation. 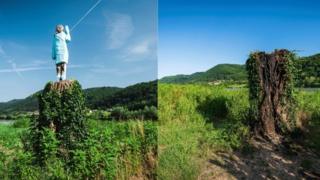 However, the White House is yet to make a comment at the time of this report.

The sculpture of Mrs Trump, which could be described as only bearing a crude likeness to the US first lady, was carved out of a tree trunk on the outskirts of Sevnica, her hometown in central Slovenia.

The statue, which depicts Mrs Trump dressed in a blue coat similar to one she wore to her husband’s inauguration and with a club-like hand gesturing to the sky, received mixed reviews when it was erected in July 2019.

Some residents branded the statue a “disgrace”, complaining it looked more like the Smurfs character Smurfette than the first lady.

Mr Downey told Reuters he wanted to understand who targeted the statue and why.

He said he had hoped the statue would open a dialogue about the political situation in the US, including the fractious debate on immigration.

Mrs Trump, a model who grew up in Slovenia when it was part of Yugoslavia, moved to the US in the 1990s.

The statue in Slovenia was targeted at a time when monuments of US leaders with links to slavery are being re-evaluated as a result of national reflection prompted by anti-racism protests.

In recent speeches, including his Independence Day address, US President Donald Trump has taken a hardline against those who vandalise or tear down statues.

Since Mr Trump was elected US president in 2016, Sevnica has become a tourist magnet, as visitors search for an insight into Mrs Trump’s early years.

Residents have brought out ranges of Melania-branded merchandise, including slippers, cakes, and Trump-like burgers with fly-away cheese “hair”.

In August last year, a wooden statue of President Trump was constructed in Slovenia, east of the capital Ljubljana. Like the rendering of Mrs Trump, the statue of her husband divided opinion.

Standing nearly 8m (26ft) tall, the statue was burnt to the ground by unknown arsonists in January this year.

Nigeria at 62: Nigerians are tired of failed leadership – Peter Obi

Why is Bola Tinubu Hiding in London? By Farooq Kperogi