The Minister of defence, General Bashir Salihi Magashi Rtd, has been caught sleeping while the President, Muhammadu Buhari, was making his speech at the presidential visit to Borno State on Wednesday.

The President had embarked on a condolence visit to the people of Maiduguri on Wednesday, over the continuous killings of people, most recent being the killing of about 30 people, by Boko Haram insurgent group. 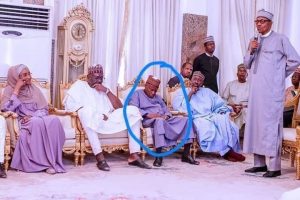 Buhari made this known before leaving Borno state on Wednesday. The president had headed to the state from Ethiopia where he attended the African Union summit.

Buhari said: “As commander in chief, I campaigned both in 2015 and last year on three fundamental issues which include security; you cannot preside over an institution or a country if it is not secure. This is just common sense, everybody knows this even those that have not gone to school know this.

“We are working for you in this country. As commander in chief, I am dealing with the security institutions and I believe there is an improvement in security.

“I urged the people of the state to cooperate with the law enforcement agencies and let us deny Boko Haram access to our loyal citizens and encourage displace people  to go back to the land.”

“If they don’t cooperate with the government, they are endangering their future. I am already 77, how many years do I expect under normal circumstances?.”