The Ministry of Labour and Productivity under Dr. Chris Ngige has debunked rumours making the rounds that it had been directed by the Federal Government to recruit thousands of unemployed youths and described the recruitment notice being circulated as a “scam”.

In the messages that had been circulated on Monday, job seekers were directed to approach any Federal Secretariat in their state to submit their Curriculum Vitae (CV) in expectation of potential employment.

The notice also gave the deadline for submission of applications as January 7th.

But in a statement signed by the Deputy Director (Press), Samuel Olowookere, the ministry denied that the recruitment notice originated from them and warned unsuspecting members of the public against falling victim of the antics of fraudsters who were using the ministry’s name to deceive the public.

See a copy of the ministry’s statement below… 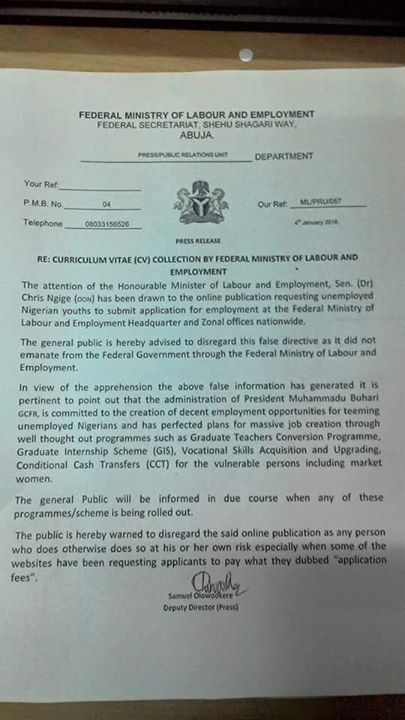 Buhari Reacts to Abduction of Schoolgirls, Says ”we’ll not succumb to blackmail”