Mompha Deletes All His Posts On Instagram Shortly After Bail

Ismaila Mustapha popularly called Mompha, an Instagram celebrity, has shocked his 685,000 followers on Instagram by deleting all his posts on Tuesday. 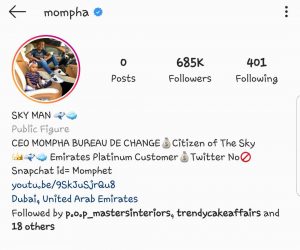 The Instagram Slay King had been in EFCC custody for months but was however released on Monday, December 9 after meeting his bail conditions.

Mompha who had been evading arrest for a long time was finally caught by the coordinated efforts of the International Police, Interpol and the Economic and Financial Crimes Commission on Oct 22, 2019.

He was arraigned on 14 count-charge bordering on money laundering, fraud amongst others.

Mompha used his Instagram page to display an ostentatious lifestyle before his arrest and was the CEO of the unregistered Mompha Bureau de Change.

He was granted N100 million bail on Nov 29 with the following conditions;