The president of the Asian country, Philippine, recently made some bold statements about the size of his manhood and how well he performs during sex, at a public event in the country

Rodrigo Duterte who is now 74 years old, seemed to have startled everyone at the rally which was held in Palawan, at the Puerto Princesa City Coliseum.

The Sun UK reported that Rodrigo kicked off his speech by explaining how his male organ was always pointing upwards whenever it was erect before he mentioned that looking good without having an impressive male organ does not make any sense.

He further stated how angry he would have been if he had come into the world with a small private organ.

The president said, “If God gave me a small penis, I would have cut it in front of the altar,” he said, drawing laughs from the crowd. 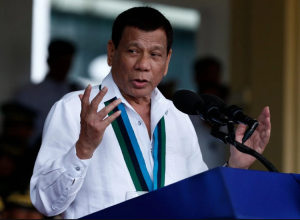 Rodrigo equally explained that he used to walk around naked to flaunt his penis when he was a student, forcing others to stare at him whenever he passed.

He continued, “When I was young, (my penis) almost looked up to the sky.

“I’m very thankful to my father. At least he let me out into the world highly-equipped.”

He further narrated how some women took to their heels when he visited their residence.