Naomi Osaka and Coco Gauff, “no victor no vanquished “

After a summer full of firsts for 15-year old Coco Gauff, the American was helpless in holding back tears after losing to Naomi Osaka 6:3 6:0 on Saturday  night at the Arthur Ashe stadium.

After two impressive wins to start the tournament and an earlier fourth round finish at the Wimbledon, her disappointment was apparent.

In a moment of absolute sportsmanship Naomi Osaka came to console her telling her it was better to do it on the court than alone in the shower room. She added that it is something she had experienced herself.

Osaka who had just won the match then insisted that young Gauff be part of her on-court in interview typically reserved for the winning player. Osaka 21 and Gauff 15 were both overcome with emotion as they spoke with ESPN’s Mary Joe Fernandez to the admiration of cheerful crowd.

It took 65 minutes for the world number one to defeat the world junior number one in front of 23,000 fans. It was obvious that the fans were rooting for young Coco Gauff – roars were heard every time she earned a point or closed out a game. When she won her first game of the night, the stadium erupted into “Let’s go, Coco, let’s go!” 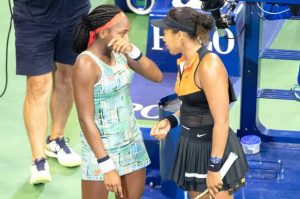 After the match, Osaka remarked: “The energy tonight was crazy,” she said before laughing. “Even though it wasn’t for me.”

“She did amazing, and I’m going learn a lot from this match,” – said a tearful Gauff before turning to Osaka “She’s been so sweet to me so thank you for this. Thank you. ”

Gauff played on Centre Court at Wimbledon earlier this summer, but she had never played on Arthur Ashe before. There is likely nothing in the sport that can quite prepare her for the size, scope and noise of that court. It is the biggest tennis stadium in the world, after all.

Fernandinho to step in as Larporte gets injured