By Adefemola Akintade Last updated May 26, 2020

According to Soyombo, a N4.9bn contract was awarded to  Osmoserve Nigeria Limited to procure Personal Protective Equipment (PPE) and other medical supplies against the novel Coronavirus. 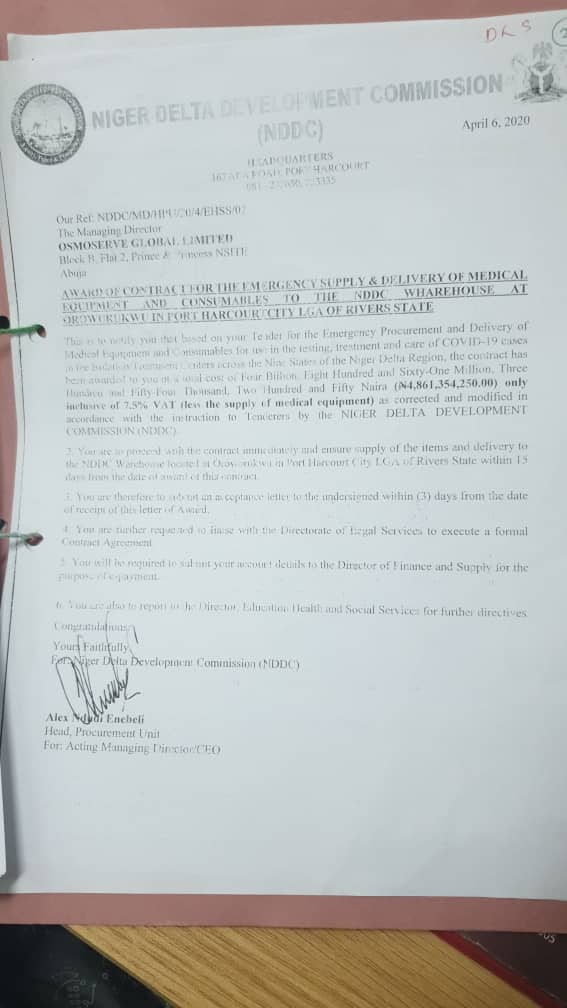 However, the emergency contract which has been awarded since April 6 was yet to be executed as many hospitals in the Niger Delta region constantly suffered lack of equipment.

“On April 6, the Niger Delta Development Commission (NDDC) awarded a N4.9billion contract to ‘Osmoserve Nigeria Limited’ for the emergency procurement of medical consumables and equipment, including PPE, for use in “testing, treatment and care of COVID-19 cases”.

“Seven weeks after, there is no Niger Delta state where healthcare workers aren’t complaining of PPE shortage.

“To be  more specific, there has been no noticeable increase in the availability of PPE to healthcare workers before and after the award of the contract.

The seasoned Journalist has called on well-meaning Nigerians to join him in questioning NDDC to account for the funds.

“Please join me in asking NDDC what happened to funds.”

Nigerians have taken to social media to express their view on the alleged embezzlement.

“I have always insisted that NDDC be scrapped. The commission is simply a conduit for looting funds since the days of Onyema Ugochukwu till date. I don’t know why the present govt is funding it.”

“Our corruption has become pathological. Even if a Nigerian is given contract to renovate his own father’s house, he will embezzle it.”

“Mindblowing corruption of the highest magnitude. This is really disturbing. These men must answer to the questions thrown at them. Where is our Niger Delta Money?”

“You see this NDDC is just a conduit pipe for looting in the SS. I am Igbo but it pains me every time to see the SE & SS always complaining about how the North is more developed with infrastructure.

Outside David Umahi of Ebony, the rest of SE & SS gov are doing nothing…

“This govs are just embezzling money, no good infrastructure, nothing nothing , look at the roads in the SE SS compared to the North…

“NDDC including all the SE SS gov needs to be held responsible.”