A prostitute from Nairobi called Rosemary Johns has revealed that she has slept with over 5000 men.

The 64-year-old was raised partly in Tanzania before moving to Kenya, where unforeseen circumstances led her to prostitution.

She married at 16 but after 5 children, her husband began to neglect her. She now has 8 children.

She claims that she is a staunch and baptised Christian who never misses church.

She started in 1984 and was planning to retire. She started small leso business after getting Ksh70,000 loan from a local bank, but fire razed down her house and shop in March, 2016, forcing her back to prostitution.

The veteran prostitute looked back at a career spanning over 20 years revealing that on a good day she engaged as many as 40 men while on a bad day between 5 and 10. 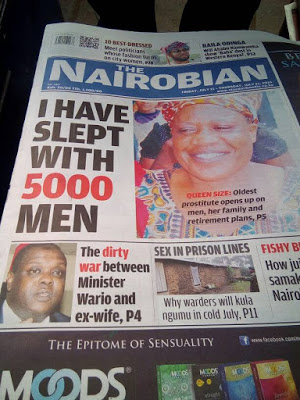