Just while we were getting our heads wrapped around the Wizkid/Dammy Krane brouhaha, another music beef was brewing underneath and this time, lawyers were involved!

It all started when Tunde Ednut released his new single ‘Kosowo’ and while we were celebrating this release, news emerged that the beat of the song which Tunde said was produced by Masterkraft was indeed produced by Davido’s producer Shizzi.

Shizzi said he made the beat in 2014 and Wande Coal even freestyled on it so he was shocked when Tunde Ednut released his own version without his permission. He also contacted his lawyers and the served Tunde Ednut and his Nutcase records summons. See the letter below: 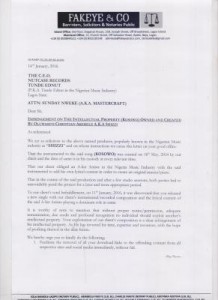 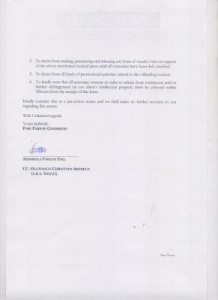 Now, what isn’t clear is Masterkraft’s input in the whole situation. Shizzi then clarified the situation by stating that Tunde did not inform Masterkraft that he had previously worked on the song. See what he wrote below:

“I have read several accounts of the unfortunate incident regarding the unauthorized appropriation of the intellectual property rights in the sound recording I had made sometime in 2014 by Mr. Tunde Ednut.

Contrary to the spin in the media, I never at any point engaged in any studio session with Mr. Tunde Ednut regarding the sound recording. The original sound recording was indeed created by me with Wande Coal providing freestyle vocals on it and I have attached a link of the original version in this release.

Kindly note that further to painstaking enquiries, I have discovered that Masterkraft was not in anyway complicit in the alleged theft of the IP rights as Mr. Tunde Ednut with malicious intent omitted to mention to Masterkraft my ownership rights in the recording.

I have no intention to engage in a public trade of words with Mr. Tunde Ednut, which is why I had instructed my lawyers to take the appropriate actions. It is my profound belief that a workman is deserving of the appropriate benefits to his works and it is high time we started according to intellectual property rights, the respect and regards they duly deserve.

While thanking the media house and blogs that have supported my brand and have reached out to me since the news of the IP conversion broke, I urge them to refrain from posting or reposting the infringing song and its video thereby engendering the continued criminal misappropriation of my IP rights pending the outcome of the law suit to be filed by my lawyers should Mr. Tunde Ednut and his cohorts not desist from their condemnable actions.

Thank you for your understanding.

Meanwhile, Tunde hasn’t responded to the theft claims yet. People, 2016 is going to be an interesting year!

Wayne Rooney Is The Greatest Goalscorer in EPL