Nicki Minaj has come through with some exciting news for fans who want even more from the “Chun Li” rapper.

Nicki has announced that she will be teaming up with Apple Music for a whole “new dynasty” on Beats 1 with a radio show called “Queen Radio”. 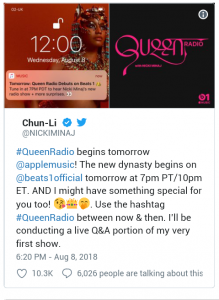 “AND I might have something special for you too!” she wrote, adding how she will “be conducting a live Q&A portion of [her] very first show.”

Starting September 21st Nicki and Future will be hitting the road for their NICKIHNDRXX tour.

Tekashi 6ix9ine has been the first act revealed to join them on the road, with two more supporting artists still unannounced.

Nicki and Tek teamed up for their recent collaboration “FEFE” and Minja recently revealed how the Brooklyn youth made fun of her voice when she sent over her verse.

“He sent me a voice note back making fun of my voice. I was literally in bed half sleep! Smh 🙈 i was inspired tho cuz it reminded me of a song I did wit GUCCI years ago,” she wrote.

“Queen Radio” is a radio show to anticipate and even drool over, especially for all the Nicki Minaj die-hard fans .

In my candid opinion, Nicki is an artist that I know can actually pull off a radio show.

Apart from being an artist, she is someone that has something to say about everything, and yes she is good at that.

She is also a free-spirited individual with a humorous personality.

Good luck Barbie on your new achievement. Many more to come.

Despite my experiences, I’ll never discourage anyone from falling in love…