Keith Maki Chung, a Nigerian, has been reported to have returned 7.8 bitcoins, worth $80,000 dollar to its rightful owner, PM News reports.

According to him, he woke up to find 7.8 bitcoins in his account but immediately began tracking down the owner knowing fully well that the bitcoins could not have belonged to him. 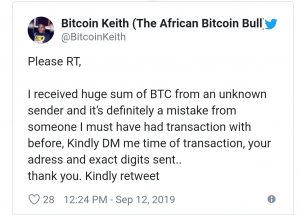 “I trade in bitcoin, but never such a high amount,” Mali Chung explains; on the phone from the Nigerian capital, Abuja.

“I knew it had to be a mistake so I posted an announcement via some WhatsApp groups to track down the owner.”

Maki Chung said that the owner did not come forward even after three days of his efforts to track down the owner, however, when he took to twitter to find the owner, he could a response from someone who had the correct encryption code for the transaction.

Maki Chunk has received a lot of commendations from people on twitter as his decision to search for the owner baffled a lot of people. 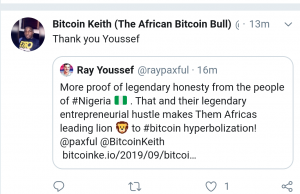 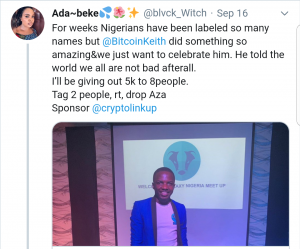 PM also reports that Mali Chung goes around Nigeria educating people about the potentials of bitcoin and other cryptocurrencies for free.

“People are especially interested in learning about international transfers to avoid bank fees,” Mali Chung has observed. “People in the Diaspora use it to send money home, and people here also transfer bitcoin to relatives abroad.”

“I fought with demons while in prison” – Olisa Metuh