Mrs Joy Nwafor recently shared the story of how she lost her daughter after she had surgery in an Indian hospital.

The prayer of every mother is to train her child and in turn the child trains her when she’s old. That was not to be my case as I watched my little Chineye who had just graduated a month ago dies in my arms owing to the negligence and wickedness of the Indian doctors of Fortis Hospital, New Delhi, India.

Chineye had just graduated from University of Abuja and was preparing for her NYSC but the family had decided that rather than just sit at home before her NYSC call-up, its best she corrects her right limb which was severely shortened after a fall in 2001. Following the fall in which she broke her femur (thigh bone) she had a surgery which involved the insertation of k-nail (iron) to support the bone. The iron eventually broke into two and a surgery was necessitated to remove the 2 piece of broken iron and correct the short limb that was causing her a lot of pains. . Little did I know that the Indian doctors had planned to kill my dear Chineye or how else should I put it?

After the surgery in India, Chineye was upset, when I asked her why, she raised her fears over the surgery, Dr Gupta the senior consultant removed only one piece of the 2 pieces of previously broken iron in her limb as opposed to the earlier agreement that the two pieces will be removed before conducting the limb lengthening surgery. When she complained, he assured her that everything will be fine.

Shortly after she was discharged, she noticed that the lengthening screw was stiff and complained immediately to the doctors but they informed her that they were looking for the right size of iron for her height. After 3 days she was forced to go to the hospital. She walked to the dressing room and two other doctors began to attend to her because Dr Gupta was not in the hospital. While they were changing the screw she gasped and suddenly lost consciousness on the dressing table; the doctors wheeled her into the emergency room. 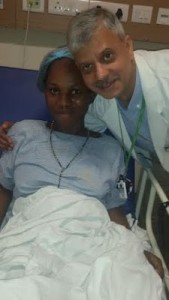 Less than an hour after she was wheeled into the dressing room, I was informed that my daughter was dead, I was shocked, I could not believe my ears, I felt the world had come to an end, even in my state of shock the best, the hospital could do was to demand for an additional payment from me as cost of trying to revive Chineye. When I walked into the room where she laid, I discovered they had already stuffed near nostrils with cotton wool while her body was still very warm, I immediately begged and cried helplessly that they should try to revive her but they heartlessly told me that there was nothing they could do that she had died and had planned to convey her to the mortuary at the time. Due to my insistence the transport to the hospital was delayed by another two hours during which they blatantly refused to administer any more procedure to revive her. Dr Gupta latter arrived and told me she died of severe heart attack.

Signs of negligence are evident in the preparedness of the surgery, as the first day she was wheeled into the theatre for the surgery it was cancelled and rescheduled because the iron was not the right size for her height even though she has done several physical consultations with Dr Gupta. Secondly, a review of her medical records reveals that there was no blood thinning medication was prescribed which is necessary for this kind of surgery. Thirdly, even after the surgery the doctors were still looking for the right size of iron. Fourthly, only one piece of the previously broken iron was removed. Finally, there was no willingness to revive her and they did not show any value for life in the urgency and recklessness with which they declared her dead and hurried her to the mortuary. Since her death Fortis Hospital New Delhi has issued several conflicting statements on the cause of her death which only confirms my fears that Chineye was murdered. They have refused to release the autopsy result and they still claim to be investigating the cause of death.

I have been crying since the 9th of October, 2015. My heart bleeds and I know Chineye’s soul seeks for justice. I speak as a mother who deserves to know the cause of her daughter’s death. I need the support of every Nigerian in this fight against this murderous act, injustice, oppression and wickedness. I am helpless but I believe that with God on my side and with the support of Nigerians and the international community by sharing this story until it gets to the relevant authorities, the killers of my daughter will not escape judgement.

I have spoken to a couple of Nigerians that have also had unpalatable experiences in their search for medical aid in India. Many have lost their loved ones and refused to share their story. I have decided to share this story to save more potential lives that will be lost due to medical negligence in Fortis Hospital and create awareness. Fortis currently has a branch in Abuja, Nigeria. Please share until it gets to the relevant authorities. Let’s create awareness and save lives.

Sugabelly Imbroglio: Man Claims To Have Video of Mustapha Audu Assaulting another Woman