*Throw him a birthday party, Nigeria is not an appreciation gift

Between the stir that this announcement has caused and the controversies surrounding Tinubu’s personality, this declaration has been nothing short of sensational.

Senior Special Assistant to the Governor of Lagos State on New Media, Jubril A.Gawat, quoting the Lagos APC went viral hours ago for this tweet: 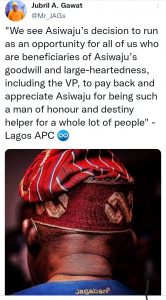 “We see Asiwaju’s decision to run as an opportunity for all of us who are beneficiaries of Asiwaju’s goodwill and large-heartedness including the VP, to pay back and appreciate Asiwaju for being such a man of honour and destiny helper for a whole lot of people”- Lagos APC

Nigerian Twitter users were, however, not very pleased with this declaration.

They vehemently rejected the sentiment behind the statement by emphasizing that Nigeria is not a “hamper basket”. 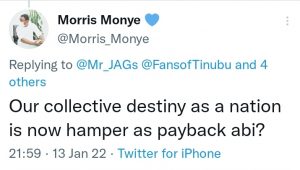 According to them, Nigerians do not owe Tinubu a presidency and if the APC believes they owe him appreciation, they can show it in several other befitting ways.

“They don’t use to use a whole country to say thank you”, Actress Jemimah Osunde was also quick to emphasize.

Other users also expressed suspicions that lifting the Twitter ban was deliberately orchestrated to cater to Tinubu’s presidential ambition.

Some of the commentators stated that the controversy generated is proof that Nigerians are beginning to awaken to the realities of the Nigerian political scene, voicing their displeasure at the game of the elite, sentiments which could affect the direction of the next election.

Involvement of the masses in political discourse paints a picture of more involvement in the polls where it truly matters.

Several Nigerian Twitter users have also launched campaigns towards encouraging the masses to register, get their Permanent Voters Cards and vote in the upcoming elections.

The APC is yet to issue any official statement concerning their choice of a presidential candidate.

Nigerians are afraid they will be caught between a rock and a hard place with the options that are currently indicating interest and gaining attention.

However, it is fingers crossed for most Nigerians on the race to the 2023 elections.

2023: We’re discussing with APC stakeholders to zone presidency to S’East…

APC’s Propaganda to Exclude Other Parties from 2023 Election – By Farooq A.…

Discordant Tune On The Removal Of Fuel Subsidy – By Afolabi Faramade