No contest as Chelsea beat Southampton on the road

Tammy Abraham has been in fine form this season and the English striker scored goal number eight in as many matches when Chelsea travelled to Southampton this on Sunday.

Tammy looped the ball over the goalkeeper which defender tried to clear off the goal-line but the ball just crossed enough for the goal.

The game may have lacked contest in terms of the score-line but the match itself was quite open as the home side created some chances of their own albeit half chances. A little more composure in front of goal may have seen Southampton having more joy in the afternoon.

Goals from Mason Mount, Ngolo Kante, and late substitute Batsuayi made it four for Chelsea. The home side attempt to muster a comeback at 0-2 when Danny Ings put one back to make it 1-2 was quickly snuffed out by a sublime Ngolo Kante’s goal to make it 1-3 at half time – Advantage, Chelsea. 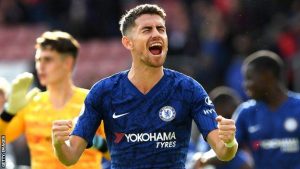 Man of the Match award went to Jorginho who bossed the midfield all afternoon with such delft of touches and vision that was too hot for the opposition to handle. Jorginho was at the heart of everything good happening for the Blues as he’s been all season long now. He came under criticism last year when some pundits felt the Spaniard wasn’t earning his wage and performed below expectations.

Frank Lampard speaking after the match in an interview said;

“I didn’t think we started that well, even though doing so had been something we’d talked about before,” said the former England midfielder. “[Abraham’s] goal came at the right time and after that, I felt pretty comfortable.

“Getting four away from home – we’re scoring – so it’s a nice afternoon.”

“Let’s not get carried away, it’s a long season and we feel we might have picked up more points than we’ve actually got. We’ve not been at our absolute best and we can be a lot better.

Southampton manager, Ralph Hassenhuttl, had this to say at the end of the match;

“We started well but to be honest we are far away from our best, and against the best opponents you only have the chance to take something if you play your best.

“We were too slow in our minds, too slow on the ball. They showed us every weakness we had and we have a lot of them at the moment.

“When they build up from behind and score we must say ‘OK’, but to give the chances we did against such an opponent, you cannot handle it. That was the reason we were 3-1 down in the first half. Second half was a little better but not really, we never had the chance to come back.

“We know it is a tough situation, but we must work really hard and that’s what we will do.”

Herdsmen hack farmer to death, with daggers in Akwa Ibom