April Joju Muse, a Nollywood actress who plays a character on the hit TV show Tinsel has come out to blast critics and reveal what transpired between her and her brother.

A couple of days ago the actress had taken to her social media account to show pictures of her brutalized face, she had alleged that it was her younger brother who had done that to her.

She revealed that it had all stemmed from an argument when she told him to do the dishes before he left for school. From there things reportedly escalated and he allegedly beat her mercilessly.

She said “It was because I told him to do the dishes he left since Friday. And he was to return to school on Sunday morning. I’ll stop here. May the devil not creep into your homes.”

After her revelation on social media, some people commented, criticising the actress for washing dirty linen in public. But April has hit back stating that she has no regrets exposing her brother and that if it made him a better person then she was okay with it. 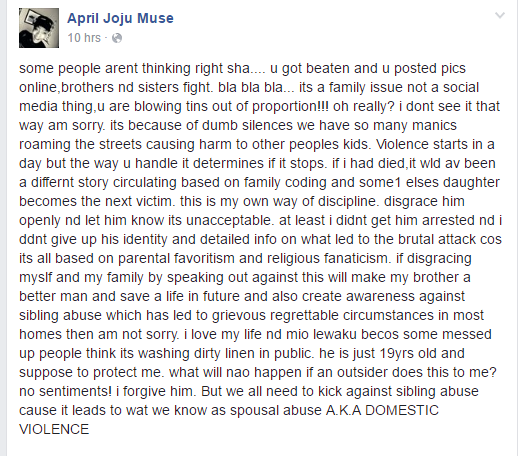