MAN GIVES OUT HIS NUMBER WITH 30 THOUSAND NAIRA MINT NOTES

A lady named Ani, took to her twitter page to tell the story of how she was gifted 30-thousand-naira cash in mint notes at a bachelors’ party.

@preetyani tweeted early Sunday morning, “so I attended this bachelors party, a man asked for my number, I declined & asked for his instead. The man wrote his number on 30k mint notes. She further went to say that, “this is the energy I want in 2020” while showing a video of her displaying the ward of cash. 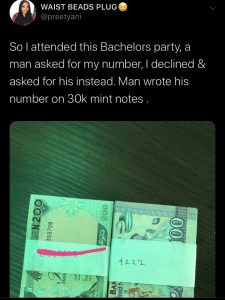 People’s reactions to the tweet varied, some were of the opinion that the money was too small. A certain Sir Walter @heiswalter tweeted: “low key if you think about it, poverty really does a number on us Nigerians. 30k Maria is like €62, it’s not even up to $100. Imagine trying to start a conversation with a British person by writing your number on £62 and passing it to them? Will they be this excited the TL is?” he explained that since the man could not get her attention he proceeded to buy it instead. 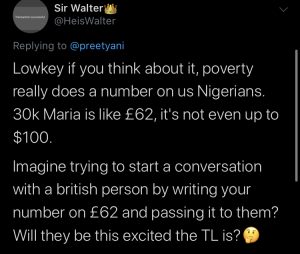 His tweet reiterated that no matter the amount, twitter users would always say it is little. The other time, a young man was dragged for earning 80 thousand Naira as salary.

Others swore that the giver was a married man. Obong Ekpe (@ody_johnson) tweeted, “I can swear with anything that that’s a married man. This can’t be found in the single men textbook or single bro code…” he then gave his advice, “run for your life dear before the wife would beat the hell outta you ohh.” 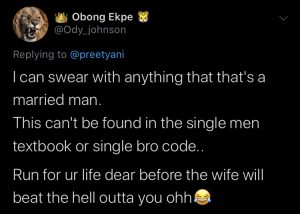 While others tried to decipher the blurred out numbers on the notes, a man named Chizom decided to do what men with no idea of what feminism  do, he ridiculed it.

Chizom (@iam_polymath) tweeted, “how to destroy feminism in 10 minutes.” For a long time now, people especially women have tried to explain the concept to those who do not understand. They keep hammering on the point that the movement is all about choice, but their words keep falling to deaf ears around people like Chizom.

A popular consensus was that men who use money or material things to gain the attention of ladies do not usually have anything else to offer. Dozie (@iworkafrica_com) tweeted, “I’m not hating but men that use money to chase ladies usually don’t have any other thing to offer in the relationship. I know a guy like that and the only reason his current babe is with him is cause of his money.” 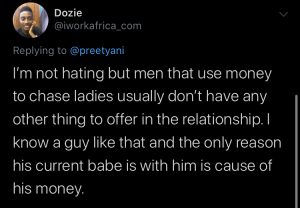 Although men were bashing the lady from left, right and centre, her fellow ladies were hyped about it as they commented,” energy!!” People asked their God questions like, “Oluwa watin dey finance?” The BoxBreaker (@the_oluchime) was inquisitive about his fate as the only mint he has received is peppermint. He tweeted, “people are receiving 30k mint notes, but the only mint I have ever known is peppermint. Oluwas watin dey propagate?” 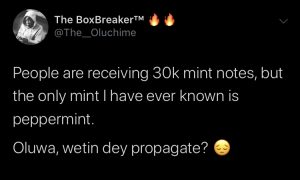 I have a keen interest in fictional stories that portray the happenings in our society. I write to bring about a difference.

Osun court remands Masquerade custodian, 3 others over murder of Muslim