Okinoshima: The Island That Bans The Presence Of Women

Japan happens to be one of the world’s hotspots for tourism in the world, making use of its shrines and rich heritage on the main island area as well as the surrounding areas to draw in crowds of foreigners.

However, amidst all these tourism points is one small island that is very much unlike the others. It uniqueness is as a result of one remarkable thing; there is no female in its total population.

Okinoshima, an island steeped in Shinto religious tradition, takes ancient taboos seriously, including the controversial one that bans women from stepping foot on it.

Even men have to tread carefully on the island, by stripping naked and undergoing a purification ritual before arriving. They can’t take any souvenirs from the island with them when they leave — not even a blade of grass — and must never disclose details of their trip, the BBC reports.

The whole island is considered sacred ground. Its population consists of priests who work at Okinoshima’s shrine, which is part of the larger Munakata Grand Shrine.

It is the priests who enforce the ban on women, although there isn’t much known about why the ban exists.

“There are varying explanations for the ban, but some say it is because menstruation would defile the site,” Ryo Hashimoto wrote in the Japan Times.

“Shinto treats blood as an impurity.”

Another reason may be that because sea journeys to the island were considered dangerous, women were banned from traveling there to protect them, as bearers of children. 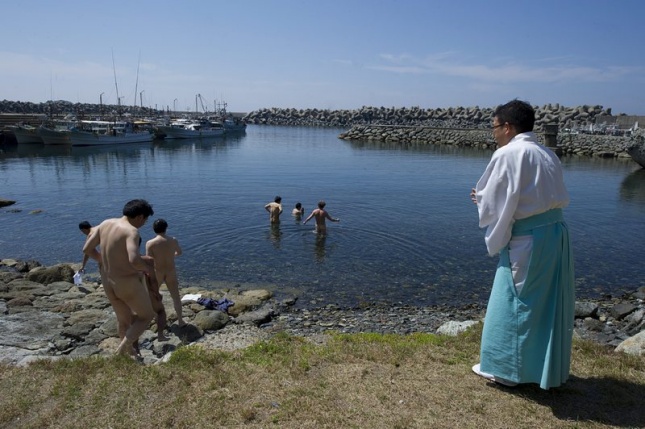 Okinoshima sat along important trade routes between Japan and the Korean Peninsula between the fourth and ninth centuries.

Seafarers seeking protection from the gods would stop at the island to pray and make offerings, including beads, mirrors and swords.

Over the centuries Okinoshima amassed about 80,000 of these precious trinkets, which are considered national treasures.

And these treasures may be part of why Okinoshima has attracted the attention of UNESCO, which will consider granting the island World Heritage status in July.

But the heritage listing could come at a cost to the island. It would bring Okinoshima to the world’s attention and attract curious tourists — and it may make the ban on women especially problematic.

Currently, the island barely gets visitors. Men are allowed to visit once a year, on May 27, for a festival held to “comfort the spirits” of Japanese and Russian servicemen who died in battle in the Sea of Japan in 1905.

There have been objections to Okinoshima’s men-only rule, including by a Hindu group last year that demanded UNESCO deny the island heritage unless it allowed women to enter.

But even if the island is granted the heritage listing, some say it will never change.

“Our stance will remain unchanged even if it’s registered in the World Heritage List,” a Munakata Taisha official told the Mainichi Daily.

“We’ll continue to strictly regulate visits to the island.”

Takayuki Ashizu, chief priest of the Munakata Grand Shrine, agreed, telling the Japan Times: “We wouldn’t open Okinoshima to the public even if it is inscribed on the UNESCO cultural heritage list because people shouldn’t visit out of curiosity.”

One solution being considered by the Fukuoka prefectural government is setting up a facility where tourists can learn about the island without actually visiting it, the Japan Times reports.