The brother to Olakunle Churchill, the Ex-Husband of Tonto Dikeh has hit out at the actress over claims that Churchill was squatting at her house.

The actress made this claim stating that she had borne a lot more of the expenses than people knew.

Churchill’s brother was not pleased with this and released a lengthy post in which he questioned her acting credentials and shut her down stating that she was lying.

Read what he wrote below

I vividly recollect the day I met you on my birthday with your friend while we were celebrating the Benz’s my brother bought. Even at that period we met you, you were in a messy debt, embarrassingly owning your online shopper some money, so bad that you had no money to pay and you had to burn her bag and shoes. It was that same period you told my brother about the debt and followed him to Ghana and he left me in Nigeria even though I came all the way from London. Regardless of your bad reputation, someone was still proud of you.
‎
What exactly is your gain ? Are you trying to scare young girls off marriage because of your hidden agenda? You are saying my brother squatted with you ? How? How many houses has he got to be squatting? I’m very ashamed of you!! Have you bought a land before in your village? What do you have ? you’d be deceiving people speaking in rubbish tongue! Running after small boys and all the 70 years sugar daddies. Please note that the wives of the old men are complaining for Christ sakes. Lady, my brother has been ballin long before you dreamt of coming to Lagos from your village. We do not boast but we are from a very comfortable background! You serial blackmailer, he’s not contesting for any election, so leave him the hell alone! I remember how you broke my moms house you and bit my arm I ignored it. Madam, just leave us the hell alone ! WE DO NOT WANT TO BE ATTACHED TO YOU! This man did not touch you neither did he push but you lied because you feel you are a celebrity ! Celebrity my ass with no income !
‎
Is it not this same man you followed to his place in Ghana when you sharply got pregnant, perhaps he should have left you as a baby mama but he still honoured you by putting a ring in that your dirty finger! One thing I learnt is hoes will be hoes ! You can’t be saved ! I know how many times he traveled back and fourth because of you! You complained about life bitterly and I am sure people remember when you wanted to commit suicide and how much my brother tried to keep you alive because you said you couldn’t get pregnant as well!‎

At least one man was proud of you even when you thought you brought him fame ! The real truth is anyone you roll with automatically gets a bad name ! My brother who stood by you and this is what he gets? The truth is that even if you get married to an okada man, everybody would know him and call him a Balu ! ‎

You are such a fake actor, surprisingly claiming he squatted at your place? HOW??

Someone that bought you an expensive ring ?

Someone that bought you a 32million Naira worth of car,

the Prado Jeep you sold recently to live up to the social media hype.
‎

you lived in our uncles house in Texas, who is a surgeon for safe delivery reasons and the wife is a nurse. Even my mom travelled to Texas to help and ensure a safe delivery ! All for the love of family! My Uncle who lives in London also a surgeon travelled to meet you guys in the states !
‎
You such an ingrate, all the receipts of the money my brother sent to you 55$ dollars receipt can be produced.

The house you lived in which you claimed was bought by you, was actually rented and eventually expired, then he had to move you to Abuja and that was how you relocated to a new house and a new car.
‎
You are the one that has done wrong!

You’ve done what is unacceptable!

Then you turned it to blackmail!

You felt he would be loyal with that action of yours, you tried to blackmail him like you done to other people !

You tried to sponsor a lot of people to say things against my brother and some refused.
‎
Ain’t you ashamed of yourself? He has move on already

Also note dear, he’s not contesting for any political position, I learnt you were there when they asked him to contest for governorship, please, he’s not contesting do not worry, worry about your life!
‎
Incase people don’t know, nobody supports Tonto Dikeh, the father never did, Her siblings despise her as such did not support her, the traditional rulers in her Community was against her. Even when she does not support her Portharcourt people, her family still in keeps in touch with us because we have greater gift which is better than money and fame and that is BABY KING ! ‎

Stop using my brother to make money and be relevant go back to Nollywood acting, stop using real life for films ! Go back to your colleagues, the ones you offended go back and beg them stop using my brother for you unnecessary drama.
‎
The wives of the old men you’re sleeping with are complaining. They warned you at the court after you took the child from the house while claiming domestic violent.

The Court warmed you because you wanted to run away with the child to the states and process your papers ! Such an opportunist!
‎
The court gave him access to his child also told you to change the boys name from what you changed it to (from Dikeh back to Churchill)and your still playing cards ‎

Can you marry a trouble maker?

You are bringing out 10 years ago relationship, telling them to blackmail him

Telling them what to write against me?

Why didn’t your family side you?

Why didn’t your friends side you ?
‎
Is it a do or die affair? Just 6months marriage you already gathered all of these allegations.

Why not let him go since you don’t want him? Now you are up with STD allegations. Were you infected with STD when you gave birth or after ? Liar !‎

As a powerful person I am actually surprised he hasn’t done anything. My brother invested millions and he invested in your foundation even when you weren’t there.

How much do you have ? Are you with the government or working for them? …. stop the fake life!
‎
Where’s your talent in acting

You need deliverance and rehab that was what we initially wanted to do before you started trouble.
‎
My brother has never talked about his life He’s not fake, he does not show off ! Do you see any of his cars on the gram? I guess it’s called good upbringing .‎

In conclusion, I have come to a realisation that Ms TONTO WIGO DIKEH IS A FAILED EXPERIMENT TO HUMAN MUTATION! SHE SHOULD BE IN A HOME! 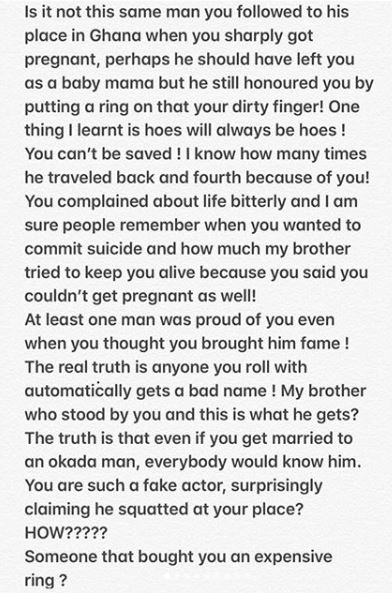 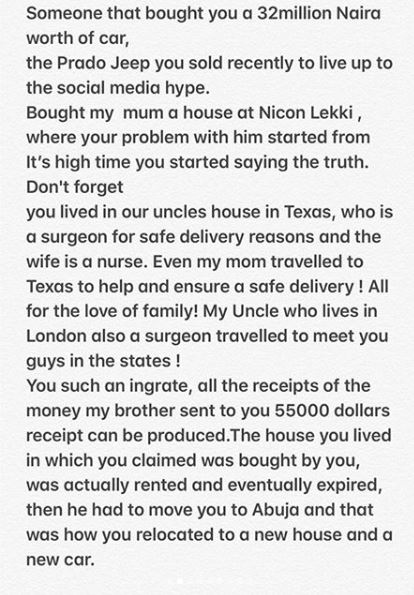 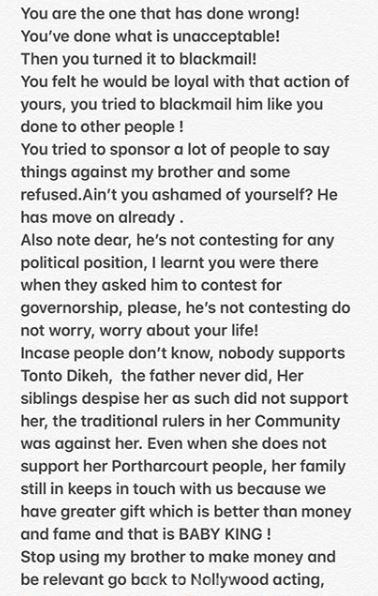 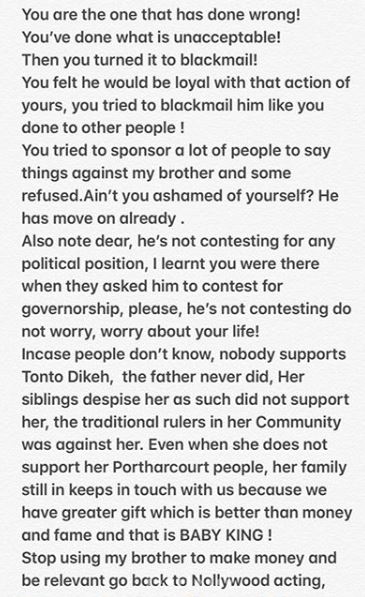 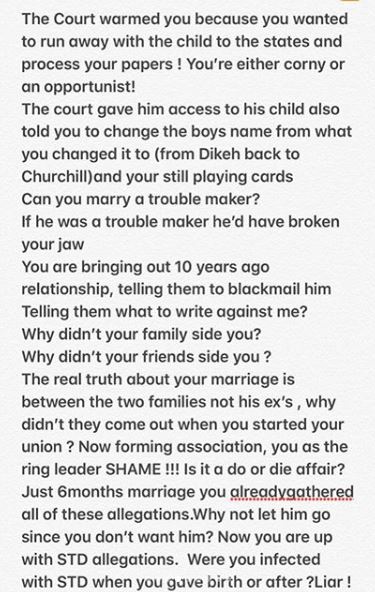 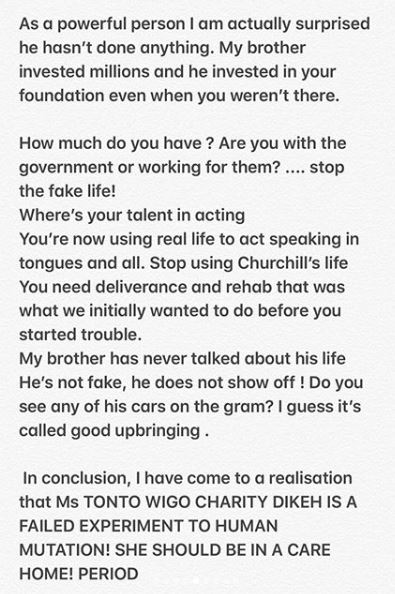 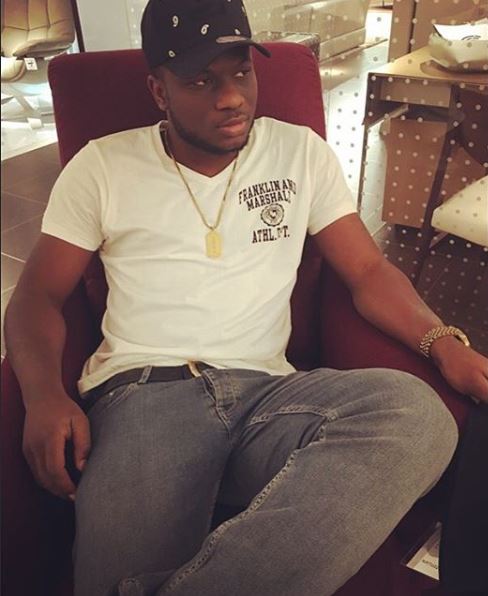