While responding to the question about whether he would leave Old Trafford at the end of the season, Solskjaer said, “Of course I won’t, I don’t want to,” and smiled afterward. He then personally mentioned that he was taking after one of the club’s legendary Manager’s, Busby, who had five consecutive wins at the beginning of his career at Manchester United.

Still, on whether he’ll stay, Solskjaer later explained,  “That will be in the books, but it’s nothing that I’m thinking of,” said Solskjaer. “I’m just thinking about the next game because if you win four, you can win another four at this club. That’s the challenge and that’s the standard that we’re known for.

“The gaffer (Ferguson) used to challenge us on them and of course when we’ve won four, you can go onto the next four and think about them.” 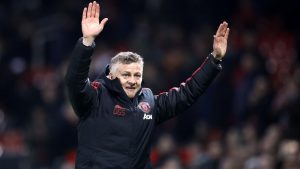 Although, there have been rumors that Manchester United board are after Juventus’ current coach, Massimiliano Allegri, if he continues to manage the team well enough, he just may earn the position of a permanent manager.

On whether he feels Lukaku should start as their striker since he has scored in as many games, Solskjaer said,  “No, I just felt it was time to put Rom and  Alexis on, and of course it was a great hit by Marcus and Romelu does his job as a striker to be following in on the rebound.”

Related: Did Alexis Sanchez Bet Money on Mourinho Being Sacked?