Omokri reveals he has proof that INEC has servers, demands 1000 retweets before publishing it

Political activist and former media aide to ex-president Goodluck Jonathan, Reno Omokri has just revealed that he is in possession of an “incontrovertible proof” that the Independent National Electoral Commission uses a server for the collation of its results.

Recall that the electoral body had vehemently denied the existence of any server within its operations following a request made by the Peoples Democratic Party to have access to it.

Now, Reno posted that an INEC spokesperson has confessed that the commission indeed has a server but he would only publish the confession when a good number of Nigerians on social media show interest in it.

See what he shared below. 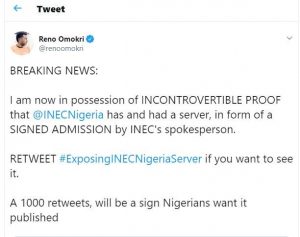