Omotola Jalade and Fan Take Swipes At each other on Twitter

The Nollywood veteran was embroiled in an online skirmish with a fan who took at shot at her music career.

Omotola had tweeted about the Voice Nigeria stating that she considered herself a fifth judge, the troll then went ahead to take a swipe at her music career which he called short-lived.

Omotola came back and told the troll to listen to her music and that she was a better singer than a lot of the singers out there today.

The troll hit back calling her delusional. At this point, Omotola refused to respond, but other people attacked the troll stating that his words were disrespectful.

You can view the back and forth below. 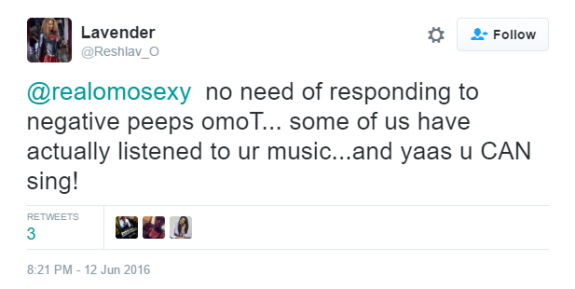 Photos: Last Terrified Text Message From One of the Victims of Orlando Shooting To his Mother