Remember the uproar caused when Sterling bank shaded major Nigerian Banks in an advert? Get ready to be rocked as Sterling Bank has done it again.

Nigerian Man Writes Letter to Presidency for Post of Prisoner

The new adverts with the caption” ORNGE IS SO LAST SEASON” is being seen by Nigerians on social media as a subtle shade to GTB whose official colour is Orange.

Billboards with the caption were seen all over town; one was even placed directly in front of the venue for the Lagos Fashion week being organised by GTB.

See the Photos Below; 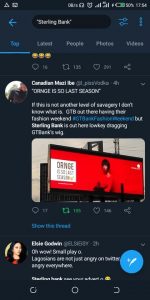 CAN Speaks On Sunday Igboho‘s Comments About Pastor Adeboye