Sequel to the N90 billion FIRS Funds Scandal, alleged by Timi Frank,  which have trailed the internet for the past few days, the Vice President, Yemi Osinbajo, has announced in a statement on Wednesday that he shall be commencing legal actions of libel and malicious falsehood against Timi Frank and Katch Ononuju.

READ ALSO: “I killed commandant because she sacked me as PTA chairman” Man confesses

Reacting to this and the culture of spreading fake news, Osinbajo, through his twitter handle wrote;

“The defamatory and misleading assertions invented by this clique have been making the social media rounds anonymously.

“I have today instructed the commencement of legal action against two individuals, one Timi Frank and another Katch Ononuju, who have put their names to these odious falsehoods,” he posted 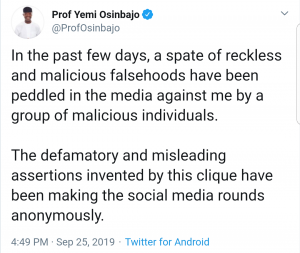 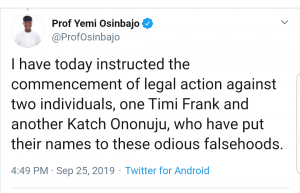