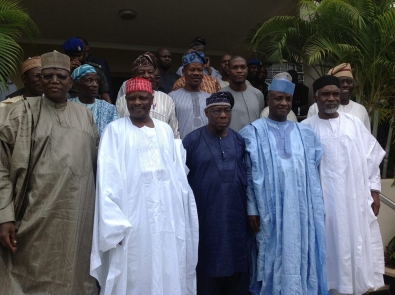 A Peoples Democratic Party leader in the Southwest, Buruji Kashamu has continued his verbal onslaught against former President Olusegun Obasanjo, calling the PDP elder a “spoiler from within”, and saying amongst other things that Obasanjo makes him sick in the stomach.

The recent tirade was instigated by an interview Obasanjo granted in London where he said, “President Jonathan said, not only once, twice, publicly, not only in Nigeria, outside Nigeria, that he would have one term, and said that to me.

“One of the things that is very important in the life of any man or any person, is that he should be a man or person of his word,” Obasanjo said, adding that “If you decide that your word should not be taken seriously, that’s entirely up to you.”

Reacting, Kashamu said, “Among the other things Obasanjo said, the one that caught my attention was where he said, “One of the things that is very important in the life of any man or any person is that he will be a man or a person of his word…

“Ordinarily, as it has been said elsewhere, I would have chosen to ignore him but I could not stomach Pa Obasanjo’s sanctimony.”

He added that obasanjo who said he will hands off Party affairs in his January 7 letter to the then PDP chairman had refused to do so but was instead working against the party.

Kashamu said, “Nothing drives this point home more succinctly than a meeting he held with a handful of his associates a few days ago. He told them to go and register with the All Progressives Congress and that he had negotiated with his kinsman, Governor Ibikunle Amosun, to fix them up.

“He said, as part of the deal, he had already secured the Ogun-Central Senatorial ticket of the APC for the former National Auditor of our great party, Mr. Bode Mustapha.

“Now to think that the same man, who cannot keep to his words, is the same person sermonising on the virtues of honour leaves much to be desired.”

Buhari to bandits: “Your days are numbered, be ready for crushing defeat”