Isa Ali Pantami and the gang of unconscionably mercenary and dizzyingly shallow PR team around him seem to think that if they can get enough people to congratulate Pantami on his fraudulent professorial “promotion” (or, if you will, “appointment”) and say it is “well-deserved,” that it would somehow deodorize its overpoweringly malodorous ethical stench and perhaps even legitimize it.

But it doesn’t work that way. Fraud is fraud irrespective of what the beneficiaries of fraud do to defend it.

Someone from Gombe shared with me this congratulatory letter on Pantami’s fraudulent “professorship” that the Gombe chapter of the Christian Association of Nigeria (CAN) was instructed to write. I hope it’s a spoof because the atrociousness of the grammar in the letter is almost criminal! 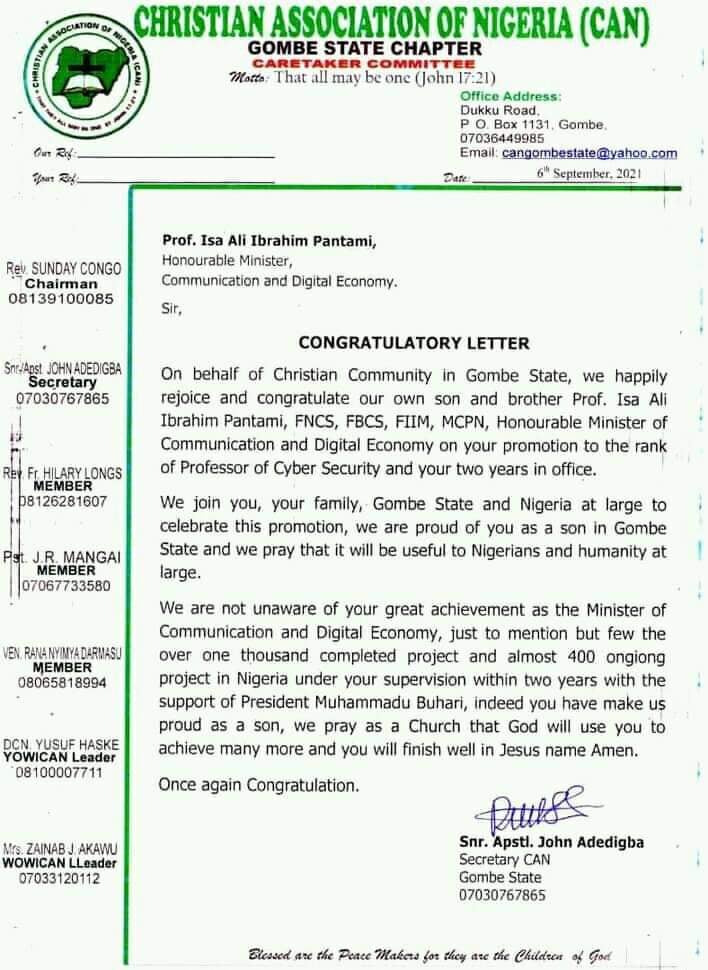 Where next should we expect a congratulatory letter from to lend legitimacy to Pantami’s professorial fraud? After the cringeworthy letter from ATBU’s VC, I won’t be surprised if Pantami approaches the National Universities Commission (NUC). Although people do change, the Professor Abubakar Abdulrasheed I know would rather resign than endorse intellectual fraud.

Look, Pantami’s professorial appointment is undeserving, illegitimate, even illegal. Period! You can insult, smear, and attack me till the end of time. It won’t change that fact.

Pantami can bribe the Christian Association of Nigeria (CAN), the Nigeria Supreme Council for Islamic Affairs (NSCIA), Jama’atu Nasril Islam (JNI), VCs of universities, governors, and so on to congratulate him on his fraudulent professorship in the most fawning ways imaginable, but it won’t legitimize the fraud of his unmerited professorial appointment.

In fact, the fact that he has a need to bribe and beg people to congratulate him is prima facie evidence of his self-awareness that he is perpetrating sky-high intellectual fraud.

This is frankly sad because Pantami, whatever you may think of him, is a supremely intelligent man who has the potential to become a legitimate professor if he wants to. But he has allowed himself to be held hostage by conceit and a thirst for cheap, unearned glory.

An Openly Partisan Chief Justice of Nigeria – By Farooq Kperogi

In Buhari’s Time, Oil Is Finally Found In The North – By Femi Adesina