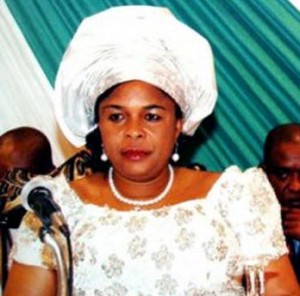 First Lady of the Federal Republic of Nigeria, Patience Jonathan was not flown abroad for medical reasons as some publications and tabloids reported, as she was spotted on Sunday evening in Abuja on a condolence visit to the FCT Minister, to commiserate with him over the death of his elder brother.

Mrs. Jonathan was reportedly flown abroad over the weekend to Germany for medical treatment according to Presidency sources.

However she was at the FCT minister’s home by 6 pm o Sunday in the presence of National Assembly members and other politicians.

Senator Bala Mohammed condemned the press for publishing unsubstantiated stories. He thanked the First Lady for her visit, describing it as symbolic and saying she looked resplendent and beautiful despite the negative wishes of her traducers.

“Our mother cannot be sick. She is here resplendent; she is here beautifully standing tall above all mischief makers. She will continue to give us guidance and leadership,” he said.

He said the false media report was made up by those who do not wish the country and the President and his family well.

What I told Gowon about NYSC – Buhari