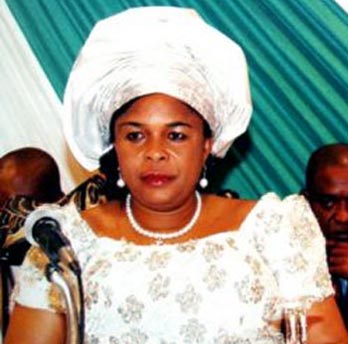 First Lady, Patience Jonathan has said that she is solidly behind Minister of Education, Nyesom Wike to take over the governorship of Rivers State in 2015.

Reacting to reports that she intended to install three governors in Bauchi, Rivers and Bayelsa States, Mrs Jonathan who hails from Rivers State spoke through a statement issued by her media assistant, Ayo Adewuyi.

The statement reads, “While we consider this a figment of the imagination of the writers of the spurious story, it is also expedient to state clearly that the First Lady does not meddle in the affairs and selection process of the ruling party, the PDP.

“Consequently, there is no way she can dictate or install anybody into political offices.

“In the case of Rivers State, the First Lady wishes to state categorically that the Supervising Minister of Education, Chief Nyesom Wike, is the leader of PDP in Rivers State and he enjoys the followership of the people of the state. The First Lady is solidly behind Chief Wike.

“The people of Rivers State are also solidly behind Chief Wike and are prepared to follow him.

“It is therefore mischievous to insinuate that Mrs. Jonathan is working to ensure that the governorship candidate comes from one of the riverine areas of Rivers State which may not be where the people are going.

“It is also imperative to state that the First Lady is always with the people and will continue to go with the wish and expectations of the people.

“Mrs. Jonathan has not withdrawn her support for Chief Wike at any time and will always work for the interest and the good of Rivers people. As far as the First Lady is concerned, there is no shaking in Rivers State.”

Man breaks up with fiancé via SMS, Judge rules she can keep N8 million engagement ring

PDP describes APC Congress as a meeting of thugs, a tale of cronyism and violence