The senator representing Kaduna Central senatorial district in the National Assembly, Sen. Shehu Sani has lambasted the Economic and Financial Crimes Commission (EFCC) for the manner it treated a former Governor of the state, Ramalan Yero.

They were arraigned before Justice S.M Shuaibu of the Federal High Court Kaduna on a Four Count charge bordering on Criminal Conspiracy, Bribery, Money Laundering and Criminal Diversion of Funds to the tune of N700 million.

They all pleaded not guilty to the charges.

But in a press statement on its social media channels on Thursday, EFCC showed a mug photo of Yero, detailing his alleged crimes. 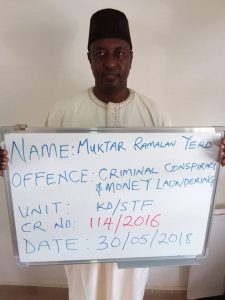 Reacting to the photo via his Facebook page, Sank said, “RAMALAN YERO and others Mugshot images with ‘a criminal tag’ shot and shared on the social media stands unreservedly condemned. He and others don’t deserve this humiliation no matter their alleged offense. Why are other past Governors, Ministers and Senators not treated this way. Power has always been and will always be transient.”

‘Not Too Young To Run’: You Are Being Hypocritical – Fayose Tells Buhari

Forget our support if you don’t understand Northern security problem –…