Photo: Shiite Leader, Sheikh Zakzaky After He Was Shot By Soldiers

A few days ago, the Nigerian Army and members of the Shiite Sect were involved in a clash in Zaria, Kaduna state.

The Shiite sect claimed that the soldiers opened fire deliberately which made it seem like a planned attack.

The army stated that members of the sect planned to assassinate the Chief of Army Staff, Lt Gen Tukur Buratai, on Saturday when his motorcade was passing through a Shia procession.

Yesterday the army released a statement that Sheikh Ibraheem Zakzaky and his wife, Malam Zeenat Ibrahim is in custody.

The Islamic Human Rights Commission had also earlier released a statement that before the Sheikh’s arrest, there was an army surveillance around his home.

Here is a photo of the Sheikh before he was shot. 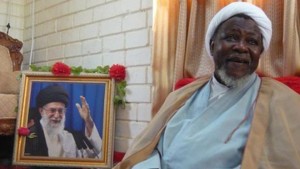 Lagos Council Accused of Demanding Money from Churches for Fumigation