Kanye West’s accusation against his wife, Kim Kardashian, and US rapper, Meek Mill appears to have been proven false.

A photo of Kim and Meek made its way online via TMZ on Thursday July 23from a meeting the two had with philanthropist Clara Wu Tsai to discuss prison reform.

Photo from the meeting between Meek Mill and Kim Kardashian that Kanye was referring to pic.twitter.com/zXtdbY9NKX

In the picture, the three are seen having lunch at what the outlet reports to the be Waldorf Astoria hotel in Los Angeles back in 2018.

Earlier this week, Kanye went on a Twitter rant and addressed a number of arbitrary topics. Within the series of tweets, ’Ye mentioned that he has been trying to get a divorce his wife since the meetup with the Dream Chasers Records founder took place.

“I been trying to get divorced since Kim met with Meek at the Waldorf for ‘prison reform,'” he tweeted. He also said that Meek “is my man and was respectful. That’s my dog. Kim was out of line.” 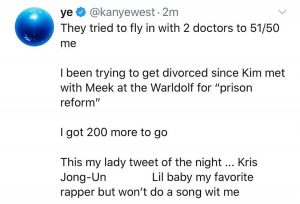 Shortly after Yeezy fired off those tweets, among several others, Meek hopped on Twitter himself. The Philadelphia native didn’t drop any names, but he could’ve been referring to ’Ye’s accusations when he tweeted, “Shit is cappp cmon …..”

“I understand Kanye is subject to criticism because he is a public figure and his actions at times can cause strong opinions and emotions,” Kim said in a portion of the statement.

“He is a brilliant but complicated person who on top of the pressure of being an artist and a Black man, who experienced the painful loss of his mother, and has to deal with the pressure and isolation that is heightened by his bi-polar disorder.

Those who are close with Kanye know his heart and understand his words sometimes do not align with his intentions.”

Meek and Kim’s meeting could possibly have something to do with the Criminal Justice Reform Summit they both attended back in November of 2018 at the Jeremy Hotel in Los Angeles’ West Hollywood.