A likely image of the shooter who killed Bettie Jennifer, Chris Attoh’s wife has been released by the Police.

The incident which occurred in a parking lot in Greenbelt, Maryland, had witnesses numbering up to 10.

Bettie had closed from work and was approaching her vehicle when a young man – armed with a gun, ran after her, and eventually shot her dead before fleeing the scene.

While explaining their findings, police officers in charge of the case stated that the incident could not have been accidental.

An officer told The Associated Press, “It was very brazen – it happened in broad daylight in front of multiple witnesses.”

The assailant’s sketch has now been released after initial consultations with those who witnessed the incident. However, no name has been placed on the face yet.

Meanwhile, findings showed that Bettie who had a wedding ceremony with Chris Attoh last October, was still married to one Kedrick Jenifer, a jailed drug kingpin, up to the time of the incident.

See the sketch released below. 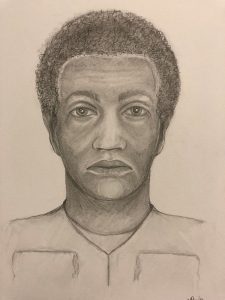