Egyptian star player, Mohamed Salah will most likely return fit ahead of the 2018 FIFA World Cup starting on June 14 if photos he posts on social media are anything to go by.

The 25-year-old Liverpool winger left the pitch injured in the club’s UEFA Champions League final game against Real Madrid on May 26.

Salah sufffered a shoulder ligament fracture when Madrid captain, Sergio Ramos wrestled him to the ground and appeared to fall on his arm in the 26th minute of the encounter. A teary Salah left the pitch on the 31st minute.

Since the injury, doubts have persisted about Salah’s ability to get fit in time for the tournament, where he is expected to be one of the biggest stars.

But hope has risen of his timely return after he posted two photos on Twitter that appear to show him recovering well ahead of the tournament.

In one of the photos, which he posted on Wednesday, the player could be seen observing the ocean in a tranquil environment. In the other posted on Thursday, he was seen grinning, which could mean that all is well with him ahead of football’s greatest showpiece. 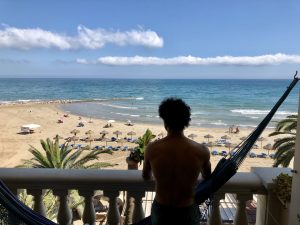 (Photo): “God is with us man” – Dino Melaye tells Saraki