Some shocking news from Kaduna state after it was revealed that a young lady delivered a set of twins with one of the babies having deformities on her body. The baby is reported to have been born with 4 hands and 3 legs.

The lady, Malama Hawwa’u Jamilu, 24, delivered the twins without complications on Sunday, 25th February, 2018. It became quickly obvious that something was different as a nurse who delivered the twins noticed that one of them was born with four hands and three legs.

News of the strange birth spread like wildfire and the Kabiru Kafinta residence was suddenly besieged by curious onlookers who wanted to see the baby.

The baby’s mother, however, was untroubled by her deformed baby whom she considers the will of Allah.

According to her; “Both of them are female. Of course, one would have loved to deliver the babies without any deformity. But since Allah in His infinite mercy had decided to create the twins like this, what can I do? This is why you see me relaxed, and I love them both.”

Besides a huge appetite, the mother claims that the baby has no other weird characteristics and she’s just like any other baby girl.

“Have you forgotten that I carried her in my womb for nine months? I love my daughter and I know that she is human, despite her physical challenge.” She said

She also revealed that she doesn’t  attend ante-natal sessions

“I think the problem is not failure to visit the hospital, because the twins are not my first. As I said earlier, it is just the will of Allah. I gave birth three times, and I have not experienced anything like this. This is the will of Allah and there is nothing one can do about it,” she said.

You can see pictures of the baby below 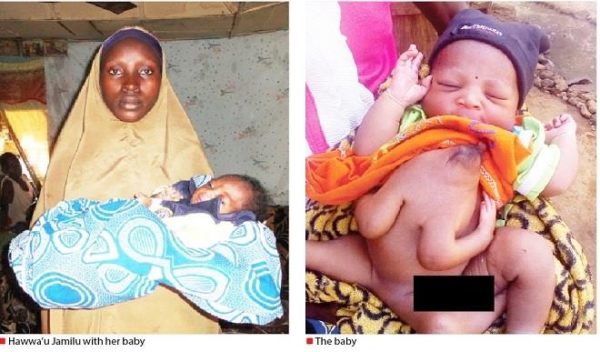 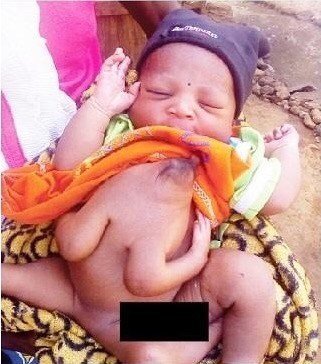