In a scene reminiscent of the military era, students of the State University Of Nassarawa got a bit more than they bargained for today as soldiers were sent in to quell a peaceful demonstration.

The students had launched a peaceful protest over the persistent scarcity of electricity and water on the campus and hostels, which made life unbearable for them and hampered their studies.

The army, civil defence and police were drafted in and four students lost their lives.

Michael Ada, spokesperson for the Nassarawa State Police Command, confirmed the killing of the students. 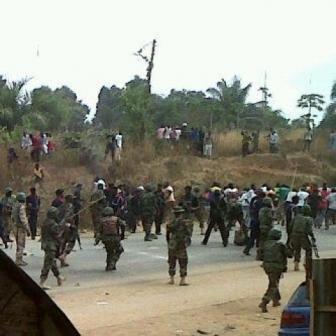 Is This Fresh Air: Enugu State Students Attend School “Shoeless” In 2013, Sit On Floor In Classrooms