Pilot Arrested For Trying To Fly 154 Passengers While Drunk

A pilot has been suspended from work after security camera caught him trying to go through the airport security drunk.

According to the CCTV footage from the Indonesian airport, the pilot who was allegedly drunk acted in an intoxicated manner as he aimed at flying a plane with more than 154 passengers on board.

The affected pilot identified as Capt. Tekad Purna was shown in the footage as he repeatedly dropped things in an uncharacteristic and clumsy manner on the floor followed by his dramatic swaying as staff of the airport tried to help him.

The allegedly drunk pilot who made it though the security check after he tipped his belongings over and broke a few items of personal effect was reported to have made it to the cockpit of the CityLink plane, a subsidiary of national airline Garuda Indonesia, before his condition was brought to notice. 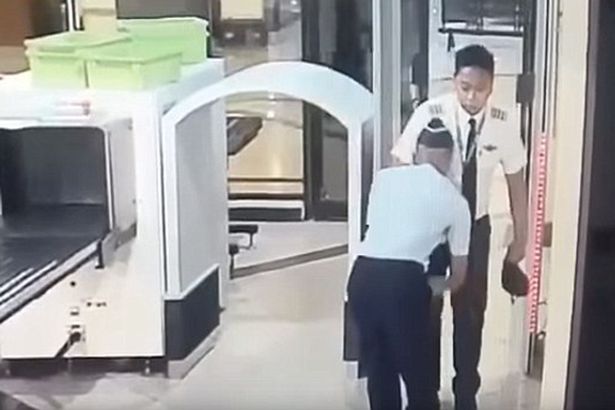 The passengers aboard the airline however protested the incoherent nature of the pilot’s announcement before they walked out of the plane resulting in nine of the passengers cancelling their flights.

Capt. Tekad Purna was subsequently removed from the aircraft and replaced before the flight went operational.

Capt. Tekad Purna was then suspended as a disciplinary measure for his reckless act.

Buhari, Osinbajo To Spend N100m On New Kitchen Utensils In 2017