A Philadelphia rapper, PnB Rock, best known for his 2016 hit “Selfish,” was fatally shot during a robbery at the Roscoe’s House of Chicken & Waffles restaurant in South Los Angeles on Monday, according to law enforcement sources.

According to Los Angeles Police Capt. Kelly Muniz, a shooting occurred at 1:15 p.m. at the well-known restaurant on Main Street and Manchester Avenue.

Rock, 30, was at the restaurant with his girlfriend, who had posted a location-tagged photo in a since-deleted Instagram post. 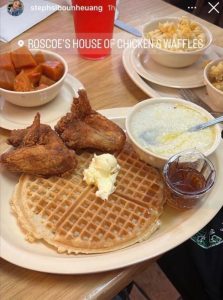 Inside the restaurant, a suspect brandished a firearm and demanded items from the victim, according to Muniz. According to The New York Times, Rock was targeted because of his jewelry.

During the robbery, the assailant shot the victim almost immediately, according to Muniz.

“He shot the victim and ran out the side door to a getaway car and then fled the parking lot,” she said.

According to Muniz, the victim was taken to the hospital and pronounced dead at 1:59 p.m.

Los Angeles Police Department investigators are examining security video from inside the restaurant to identify the shooter, according to a law enforcement source. They are also checking nearby businesses to see if security cameras captured any images of the suspect fleeing on foot or in a vehicle.

According to Muniz, investigators were processing evidence Monday night. She refused to comment on what was found.

PnB Rock was born in Philadelphia on December 9, 1991. He told Paper Magazine that when he was 19, he was inspired to make music after hearing Drake’s decade-defining album “Take Care.”

“Luv Me Again,” his most recent single, was released on September 2.

Rock’s death comes as authorities report an increase in “follow home” robberies and other violent incidents.

Pop Smoke, a Brooklyn rapper whose real name was Bashar Barakah Jackson, was killed during a home invasion in the Hollywood Hills in February 2020.

Authorities believe the assailants were led to his location by social media posts, including one of a black gift bag labeled with his address.

According to her, “After Pop Smoke, there’s no way we as rappers or our loved ones are still posting locations to our whereabouts.

“To show waffles & some fried chicken? He was such a pleasure to work with. Condolences to his mum & family. This makes me feel so sick.”

In response to the incident, Cardi B stated that PnB’s girlfriend should not be blamed.

”I highly doubt n*** was looking at PNB’s babymom IG. He was in a bad location and people stayed outside plotting. It’s very irresponsible and inconsiderate to blame her for something so tragic.

”We should be sending nothing but love to her and his family at this time.”

PNB's death just had me thinking of tjay. We could have lost this dude also😢
…being a rapper comes with many risks people just hate on you for no reason… Rip rock 🤧🙏🏼 pic.twitter.com/eC0A3kSPul

It’s so sad how often these talented BLACK musicians are dying one after the other man, being a rapper is one of the most dangerous jobs in the world, rip rock man.. https://t.co/oyKHvec1mm

reminder: PnB Rock was a 100% independent artist. the revenue generated from his music will go directly to his family, which includes two young daughters.

continue his legacy by streaming, purchasing, and playing his music❤️ pic.twitter.com/YL2OmaX3u1

RIP Rock!! The cycle of senseless violence in the black community continues. https://t.co/SyPlqLX05K

Just a few days ago PnB Rock was talking about robbery attempts on him while he was in LA. Now today he is gone. This is so sad. Rest In Peace 🙏🕊 pic.twitter.com/XmeTWuZJpx

Yahoo boys and cybercrime: Is there a defence?