As their marital issues continue to stir up arguments online, Wendy Williams’ only son has been allegedly apprehended by police officers after he punched his under-fire father, Kevin hunter in the face.

TMZ reported that Kevin and his young son had been arguing continuously at a parking lot in New Jersey before their disagreement became physical, prompting the 18-year-old boy to drill a fist onto his father’s face.

They were said to have been arguing over Kevin’s insistent that Wendy should provide spousal support for him.

At some point, he tagged his son as being brainwashed, and as he grabs him within his arms, the boy threw a punch that met him in the face. 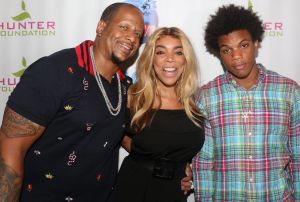 As a result, the young man was arrested by police officers with claims that the incident is being investigated.

In his reaction, Kevin told TMZ, “I love my son very much and I will not be pursuing this matter legally. Things are not always how they appear.”

Wendy Williams decided to end her marriage last month after she found out that Kevin, who she had been married to for more than 20 years, had become a father to another child by his lover.