According to reports, Takeoff was at a private event in Houston with Quavo when the verbal altercation occurred. Someone pulled out a gun and fired, striking Takeoff, who police described as a “innocent bystander.”

The Houston Police Department announced on Friday that a suspect in the fatal shooting of rapper Takeoff, one-third of the group Migos, had been arrested and charged.

DJ Pat is said to have been arrested with a large sum of cash and was reportedly planning to flee to Mexico.

“According to court documents, Takeoff alleged killer, Patrick Clark (DJ Pat) applied for an Emergency Passport days after killing Takeoff and booked a flight to Mexico,” Akademiks stated. “When police arrested him, he had large amounts of cash on him. Prosecutors claim he’s a flight risk for bond.” 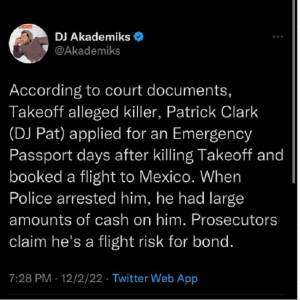 America has had a lot of gun violence in 2022. A lot of people have suffered from it, lives have been lost including celebrities such as PnB Rock and Takeoff.

“More than an entertainer, he was a son, a brother, a cousin and a friend,” said Houston Mayor Sylvester Turner on Friday. “Gun violence has to stop,” he added.

Sgt. Burrow claimed that the investigation has been stalled due to a lack of witnesses willing to speak with authorities.

“Literally, every single one of those people left the scene without giving a statement to police,” Burrow said. “It’s important that those people come forward.”

The Police Chief for Houston also said, “Do your part as a citizen,” Finner said. “If you see something, you need to say something.”

The music group, Migos was founded in Georgia in 2008. They rose to prominence in 2013 with the viral hit “Versace,” which peaked at 99 on the Billboard charts.

Business Is Booming – How To Start Your Own Company