The Rapid Response Squad section of the Lagos State Police Command has apprehended a clever thief whose mode of operation was to first hug his unsuspecting victims before robbing them of their valuables.

According to reports, Oluawsukanmi, the alleged thief, carried out his operations around Under Bridge Ikeja, Lagos, alongside some other individuals in the area.

The swindlers are said to be fond of acting like they know their victims, exchanging pleasantries, before hugging them and stealing their valuable, especially mobile phones.

Oluwasukanmi was arrested yesterday, 24th of June and would soon be tried before a law court, according to the police report. 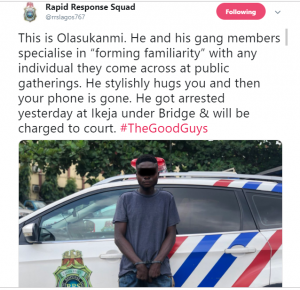